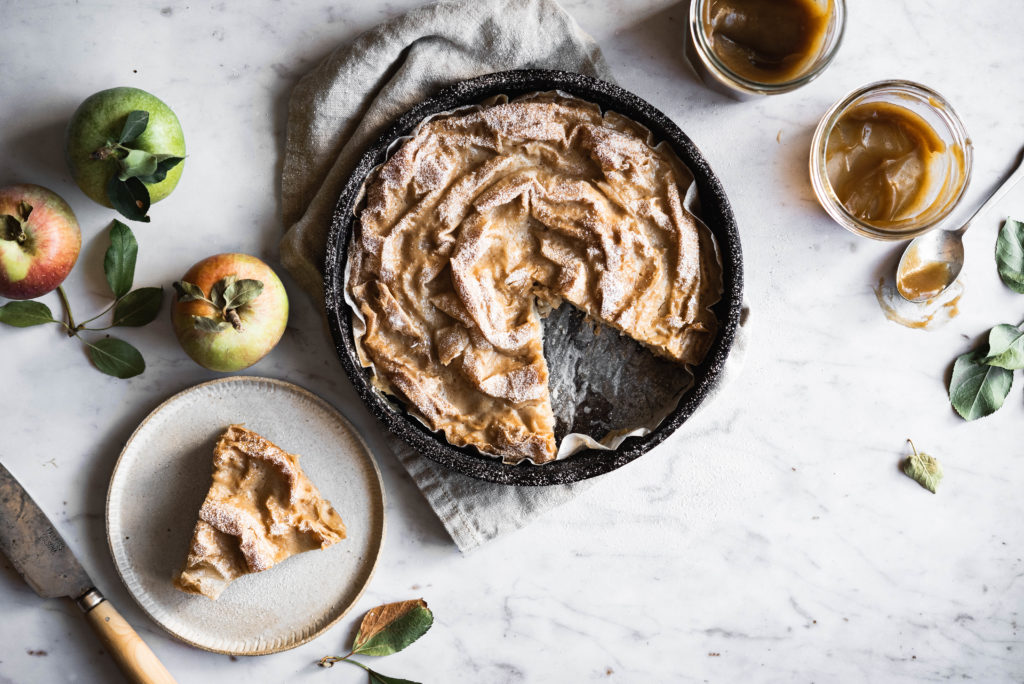 This week’s guest contributor is Bella Karragiannidis, the voice and visionary behind her creative food blog Ful-filled!

For most of my life, fall was associated with turning leaves, apple picking, and all things pumpkin. There is nothing like the anticipation for sweater weather, cozy times by the fire, and spice scented candles flickering throughout the house. Fall just may be the most nostalgic time of year, but my love for this season grew even deeper and more meaningful when I married into a Greek family.

My story is not much different from the movie ‘My Big Fat Greek Wedding.’ I’m an American girl who married into a passionately Greek family whose number one priority was for their son to marry a Greek girl who would make Greek babies and feed everyone. I was a major disappointment for them to say the least. Since making Greek babies was not possible for me as an American, food became the catalyst for me to eventually gain my in-law’s acceptance, specifically, Greek food.

Becoming Greek in the Kitchen

In the first year of our marriage, I spent most of my free time learning one Greek recipe after the next. Food had always been meaningful to me, but with no single dominating culture in my own family growing up, I had no idea of just how important food could be to the preservation of one’s heritage. It was in the kitchen, learning to cook like a Greek, that I began to discover who I was meant to be. I was becoming Greek. And it was through this culinary journey, that my in-laws finally realized that I would not deprive their son of his Greek heritage, but rather, his Greek heritage would become my own.

My mother-in-law soon realized that I was capable of executing all of the traditional Greek sweets that she had always been responsible for making, so she threw in the towel and passed that responsibility onto me. It was a great honor that I continue to relish in, especially during fall. As the weather cools, my Warm spices like cinnamon, clove & allspice are ever-present throughout the world of traditional Greek sweets. Which brings me to this apple butter ruffled milk pie that I am sharing with you today.

Ruffled milk pie (galatópita in Greek) is a sweet phyllo & milk pie. Traditionally, the flavor of the milk-based custard is sweetened with sugar & simply flavored with vanilla. But because I love to infuse traditional Greek desserts with flavors from my life growing up in America, I decided to introduce apple butter to the custard for a fall-flavored ruffled milk pie that is truly delicious.

Apple, cinnamon & star anise infused steam wafts from the kitchen, slowly permeating every room in your home with the fragrance of fall – it’s the smell of apple butter in the making. The process of making apple butter is almost as pleasurable as getting to eat it. A sweet, spice-filled reduction of fall’s most beloved fruit, cooking up a batch of apple butter is a quintessential tradition of the season. When combined with buttery, flaky phyllo dough & creamy custard, you get to experience apple butter in a whole new way.

I have made a lot of ruffled milk pies in my time, but this apple butter version is probably our very favorite of them all. The combination of our favorite fall flavors with one of our most beloved Greek pastries is perfectly meant to be. The fact that this ruffled milk pie is one of the simplest pastries to put together makes it all the more wonderful!

See my stop-motion video below for a closer look at mastering the ruffled milk pie!

Bella Karragiannidis is the creative voice behind her blog Ful-filled – where she shares her passion for real food, true health, and living a life with purpose. Bella and her husband currently split their time between their home in Northern California and their tiny studio in Greece, where they have started a non-profit organization to help with the humanitarian and war refugee crises still taking place in Greece. She just received the honor of becoming a finalist for the 2019 Saveur Magazine Blog Awards for “Best Food Instagram” category.

A harmonious combination of a traditional Greek dessert & a seasonal American preserve, this Apple Butter Ruffled Milk Pie is sure to become a treasured recipe in your fall baking repertoire.

FOR THE APPLE BUTTER:
FOR THE RUFFLED MILK PIES:

Note: Frozen phyllo dough varies in measurement (a common size is 12” x 17"). For this reason, the amount of sheets you will need can vary based on the size of your phyllo dough. This dessert is very light, so if you are serving a crowd, I would consider one pie good for 4-6 people at the most.