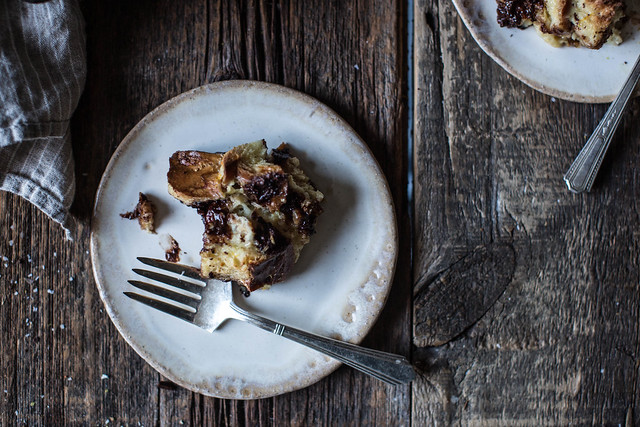 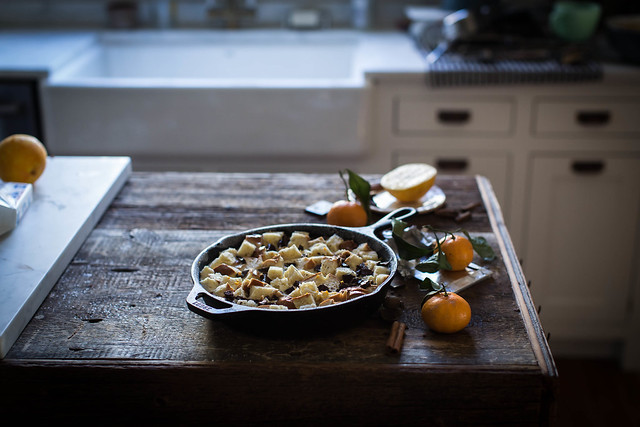 The day I made this was one of those days. I haphazardly made a bread dough in the morning. Failure. I made it again. Then I accidentally baked it in the oven in the bowl it was proofing in. Failure. I needed something that was easy. Eyes closed with a fragmented brain easy. And comforting. Something that took me far away from my rogue doughs and to do list. That’s where a Lindt EXCELLENCE bar of the Intense Orange variety came in. First, I ate a square, calmed down, and thought of how to rescue my baking day. The complex flavors inspired me. My mother always put those chocolate oranges that you smash and eat the wedges in our stockings as a kid. Chocolate orange is the flavor of the Christmas and childhood all rolled in to one. But I’ve since grown out of milk chocolate (nothing against it, love the stuff, but nine times out of ten I go for the complex, dark stuff), and I prefer the thin & impossibly silky melt of Lindt EXCELLENCE bars. I buy them compulsively on a weekly basis (along with their Lindt LINDOR white chocolate truffles which is an obsession of mine for another post…long story short I’ve been a very vocal detractor of white chocolate until I met those truffles.) The chocolate, memories of Christmas, and my favorite amongst southern iconic desserts came together in my mind. And that’s how the easiest, most delicious bread pudding I’ve ever had the pleasure of eating came into being. Some Lindt along with a little desperation. And pointedly southern hunger. 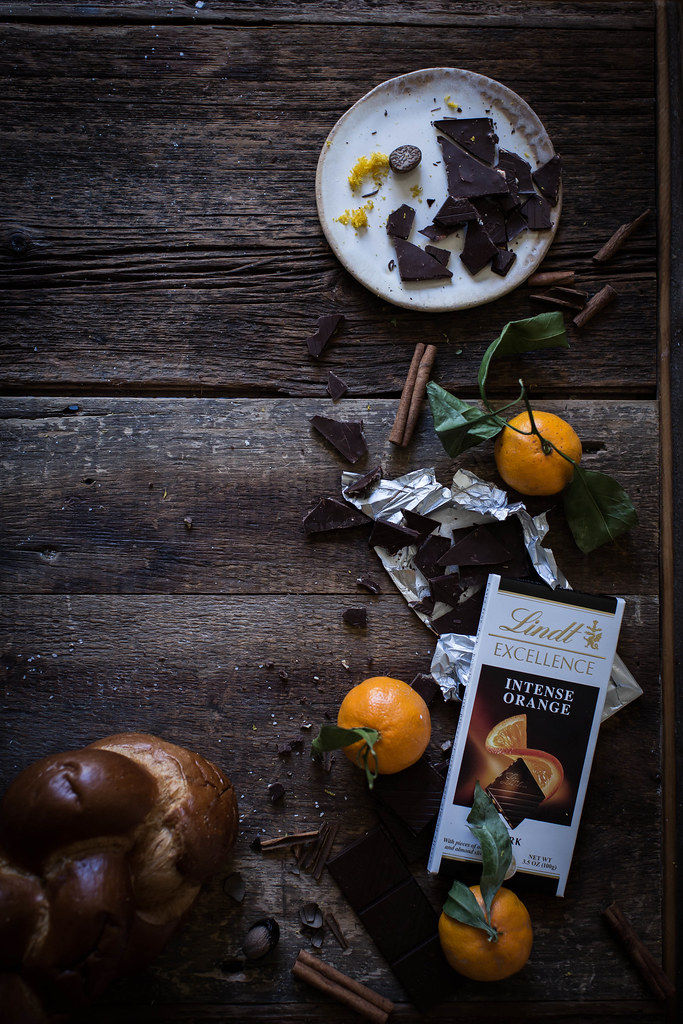 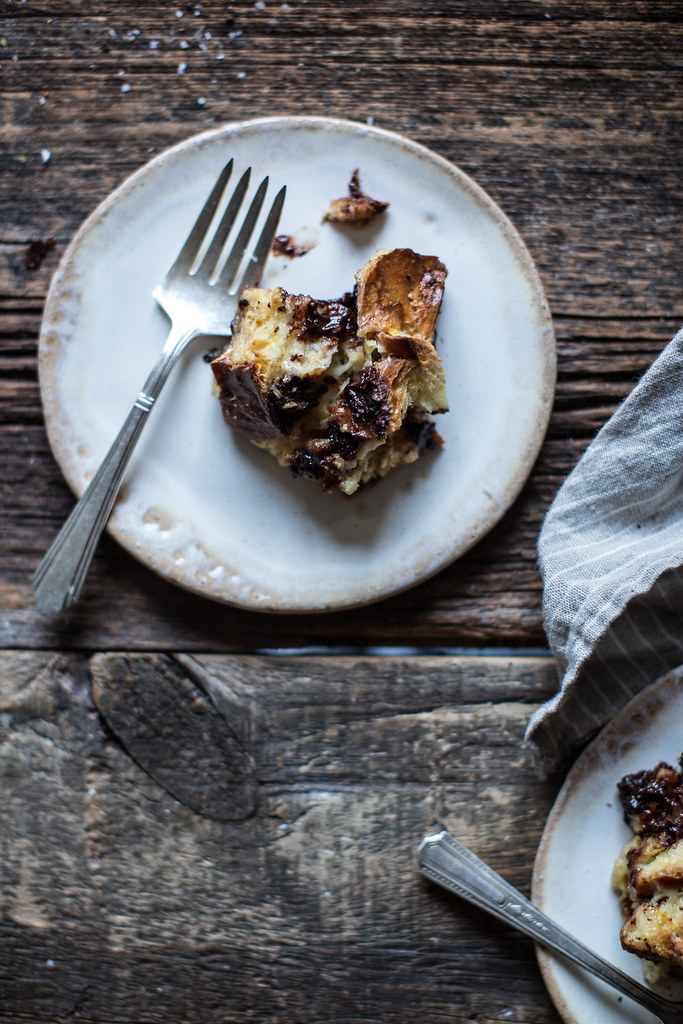 I’ve always eaten Lindt, but recently I had the opportunity to visit their head quarters and factory. It was a real life Willy Wonka experience. But instead of Willy Wonka it was their kind, charismatic CEO and instead of schnozberries it was more truffles than I have ever eaten in my life. And it was falling in love with white chocolate, something I never thought would happen. When they first reached out, I immediately researched them. What I found was a company that gives back, ethically sources their cacao, and retains an intensely human heart & passion despite how they’ve grown over the past century. Well, far more than a century. They started making chocolate in Switzerland in 1845. They know what they’re doing.

They introduced us to the concept behind all their brands from EXCELLENCE to LINDOR to HELLO, and while I didn’t need to be sold on their chocolate, it was inspiring to hear the moments they envision their chocolates creating in people’s lives. I’m always going on about carving out time, making moments. A square of Lindt EXCELLENCE slowly melting in your mouth (I like to make it last) is one of those moments. One that sort of suspends space time & takes you into yourself and quite the world around you. Chocolate is mysterious like that. And their bars engage all of your senses. They defeat distraction. So much so that they actually make a great option for a wine pairing (or in my case and equally amazing a tea pairing…which I got to experience while in New Hampshire visiting them).

I didn’t want to disguise the experience of their chocolate in a recipe, but rather, I wanted to amplify it. So I turned up the volume on the orange with zest, juice, essence, and orange liquor and kept the rest very, very simple. The only spice I ended up using was a little bit of nutmeg to highlight the nutty bits of almond in the bar. I was going to use cinnamon, but it was just too much. I needed the chocolate to sing. Secondly, I needed it easy. Insanely easy. So easy you can’t believe it’s going to be amazing. And that’s what this is. You can make it on your worst day. We all need something like that in our arsenal. Something impressive that induces those wide eyes when people taste it and requires no brain power at all. You don’t even have to separate a single egg. Just make sure you get a decent loaf of challah. Brioche would work well too. If you’re not having one of those days (or, ahem, weeks) you could certainly bake your loaf from scratch like a wizard. But a fine loaf from the bakery is what I used here. No shame in that. Bakeries exist for a reason.

So! Without further ado, get thee to the recipe. This is going to make multiple appearances on my holiday tables this season. It’s luxury, nostalgia, and ease. What could be better for both the most festive and busiest time of the entire year? Nothing, y’all. Nothing. All I can say is get a bar of this and make it, like, yesterday. It’s that good. My parents, who, being southern, are bread pudding connoisseurs, said it was a 10. That’s something. 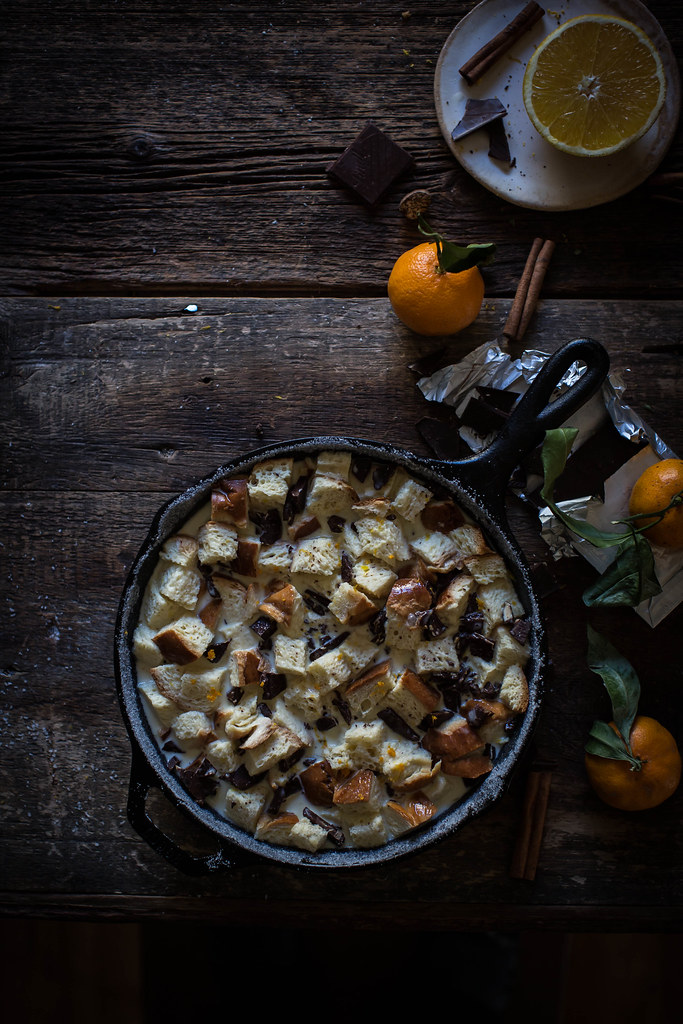 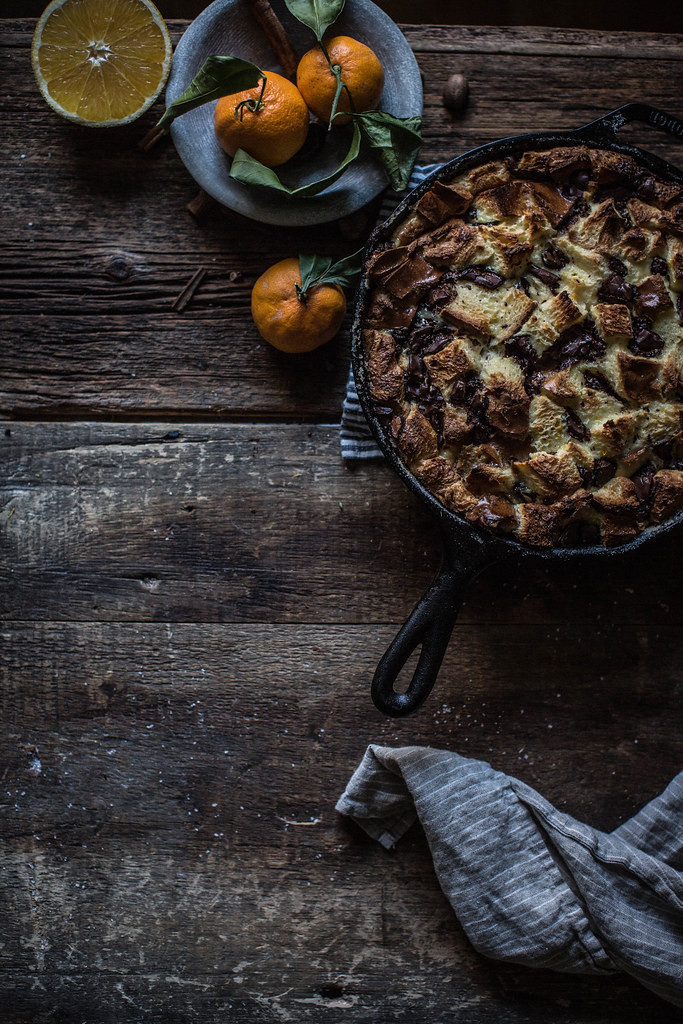 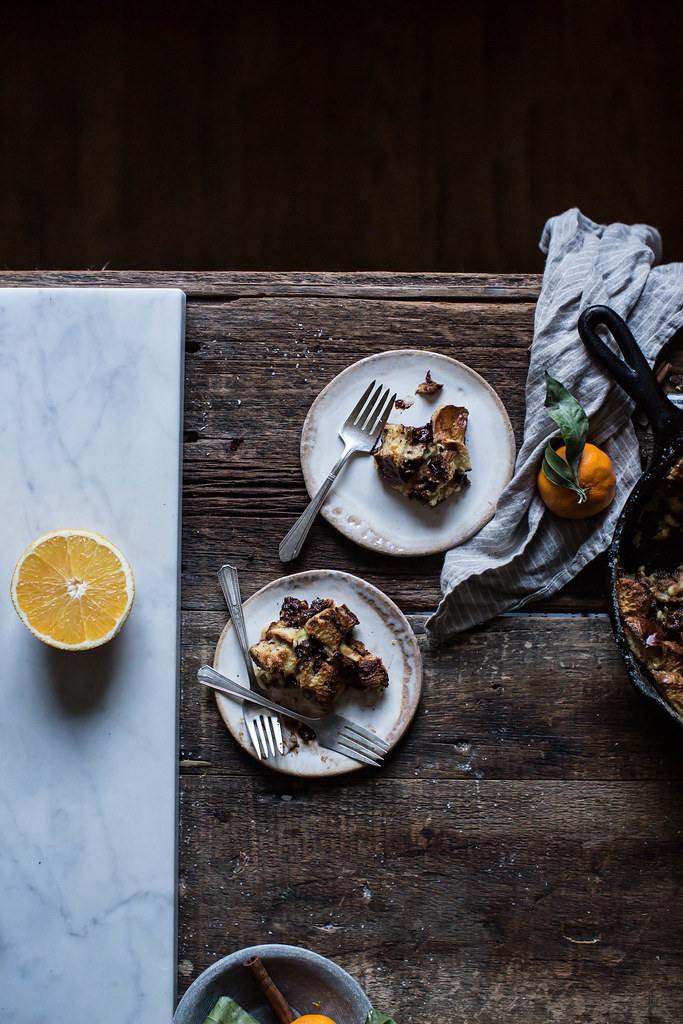 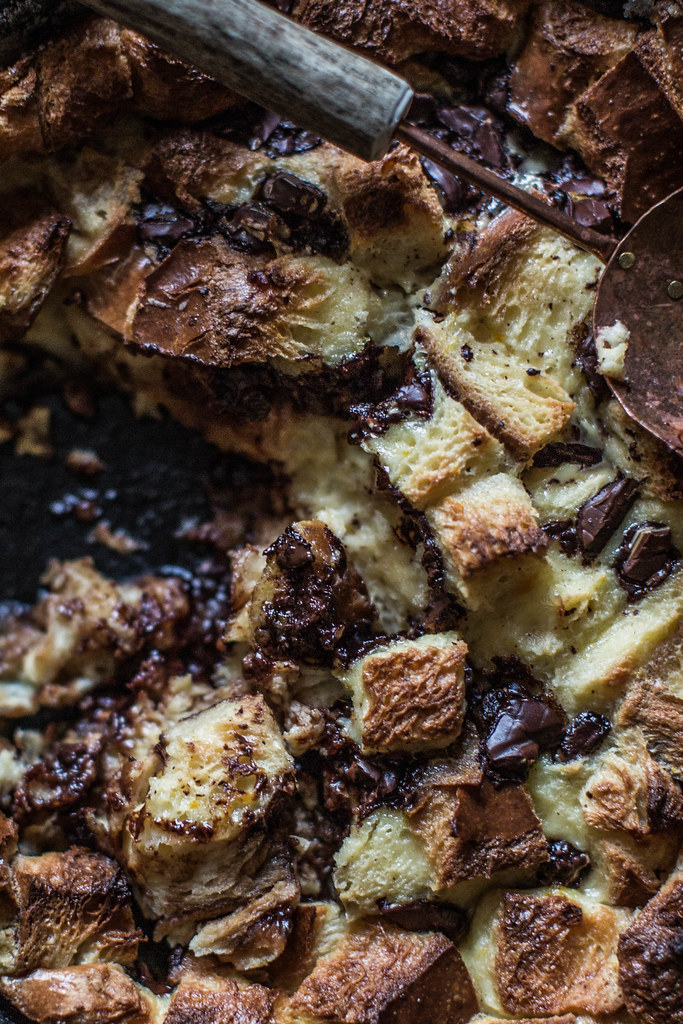 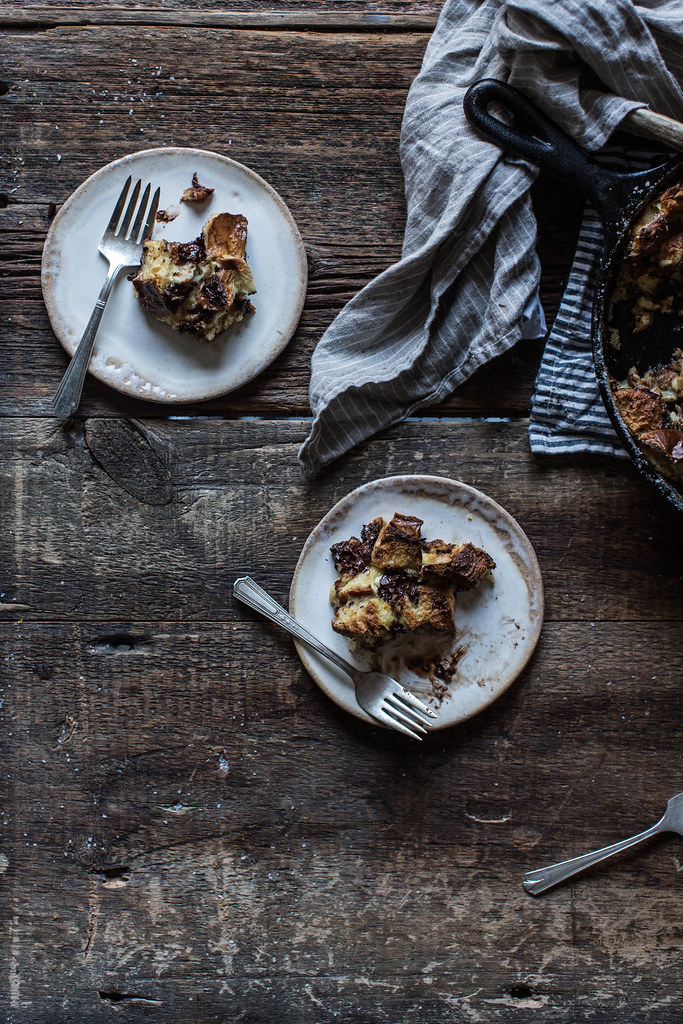 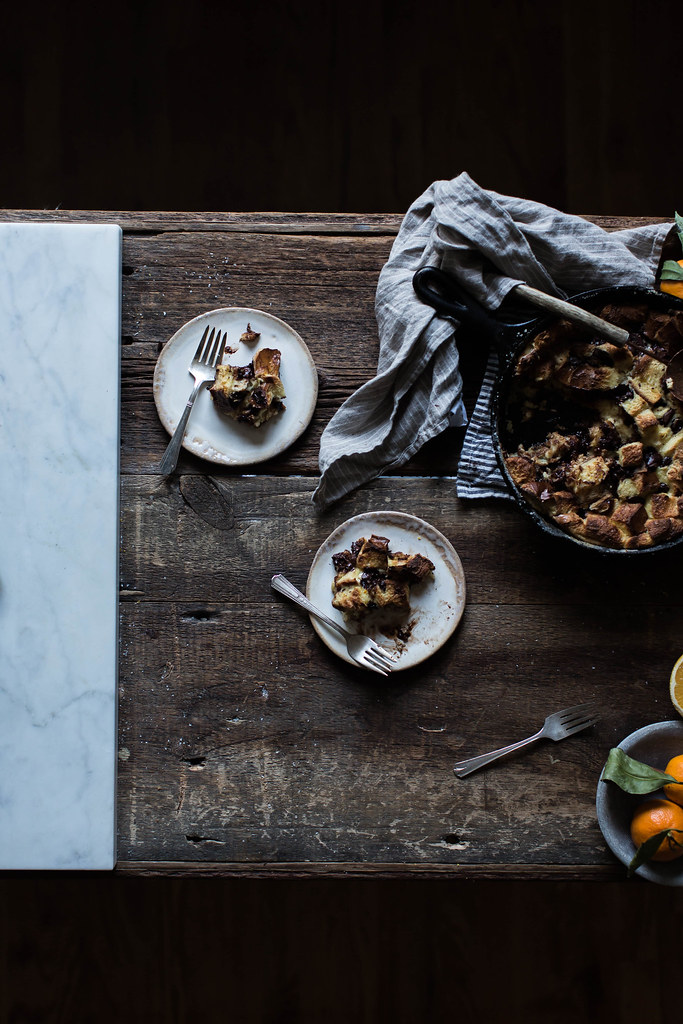 This recipe was graciously sponsored by my friends at Lindt. The opinions are, as always, my own.