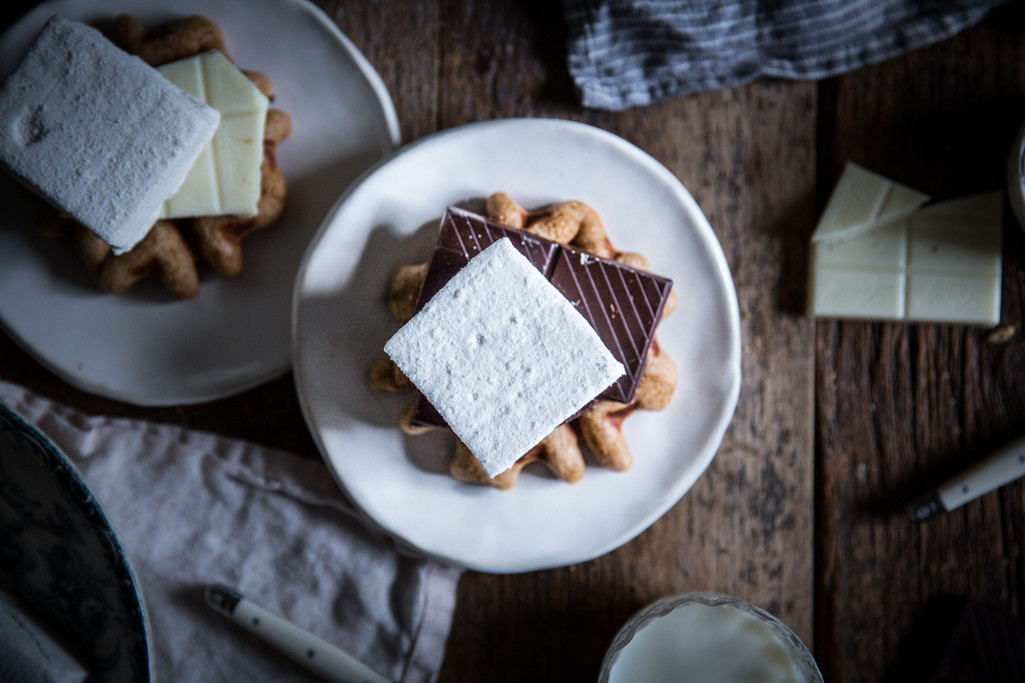 This dessert is nostalgia meets childhood fantasy with a grown-up twist: caramelized, gooey, chocolatey s’mores…for breakfast. But you’ll find no commercially made marshmallows or sub-par chocolate here. Instead Brown Butter & Graham Cracker Waffles meet toasted, homemade marshmallows and a smorgasbord of Lindt EXCELLENCE and Lindt CLASSIC RECIPE bars—we literally had every flavor they make on hand from Blackberry with Acai to Caramel with a Touch of Sea Salt to classic White Chocolate. My personal favorite was the caramel; white chocolate was a close second. And if you aren’t trying to have an intensely indulgent dessert but rather a more moderate treat or actually want to serve these for a special breakfast, another option is to chop up a bit of the chocolate and marshmallow and stir it into the batter for a less intense version of what we have dubbed the “s’morffle”. So whether you stack or mix, these are certain to satisfy both your inner child and your grown up palette. 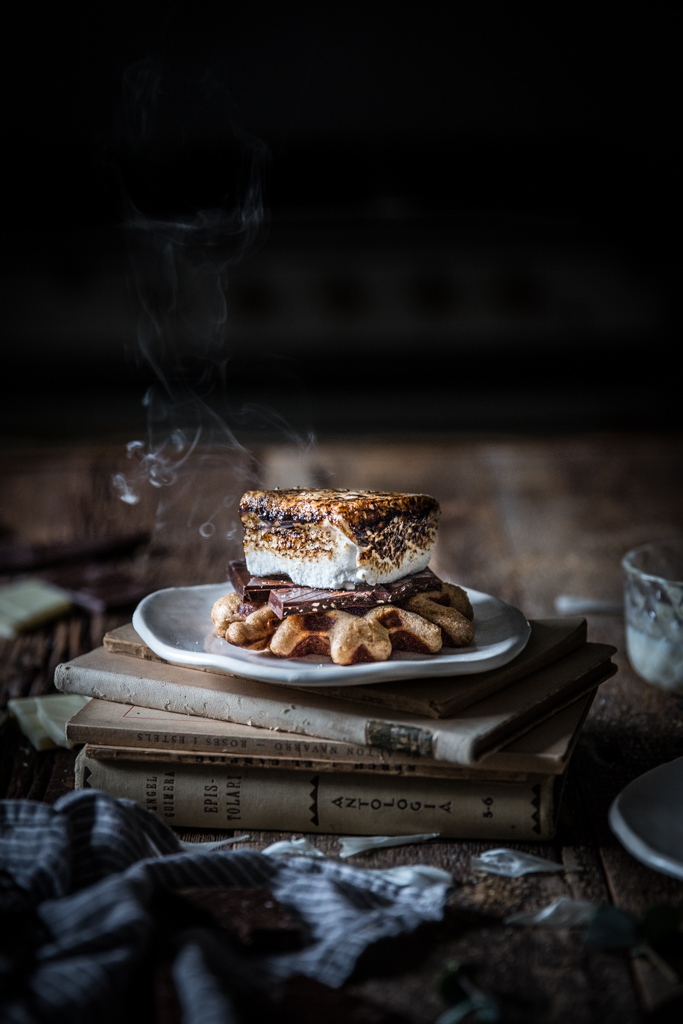 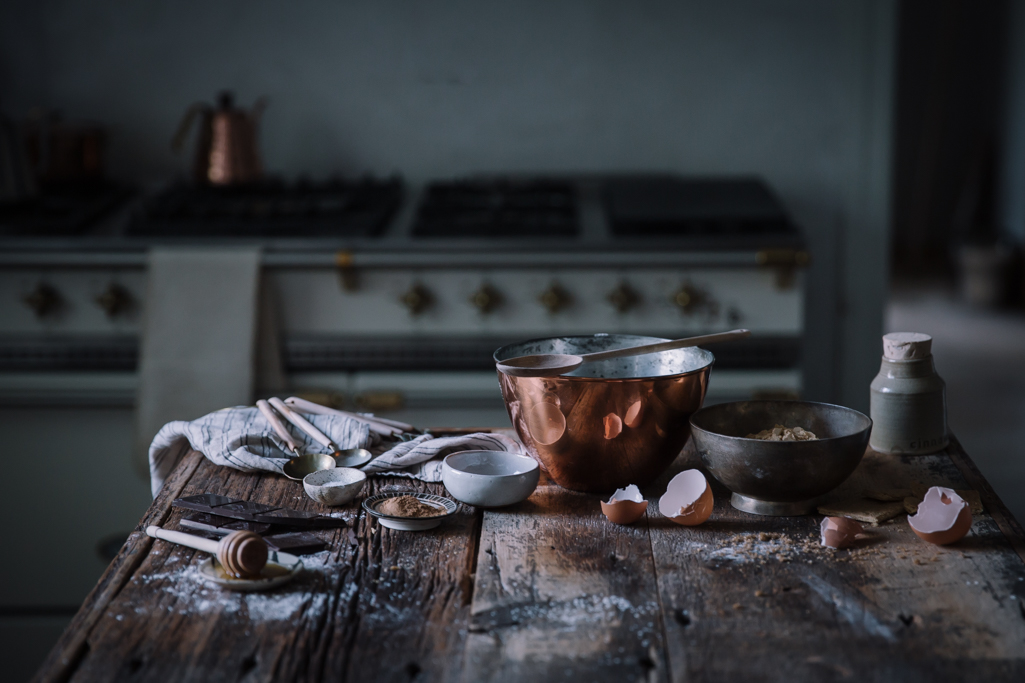 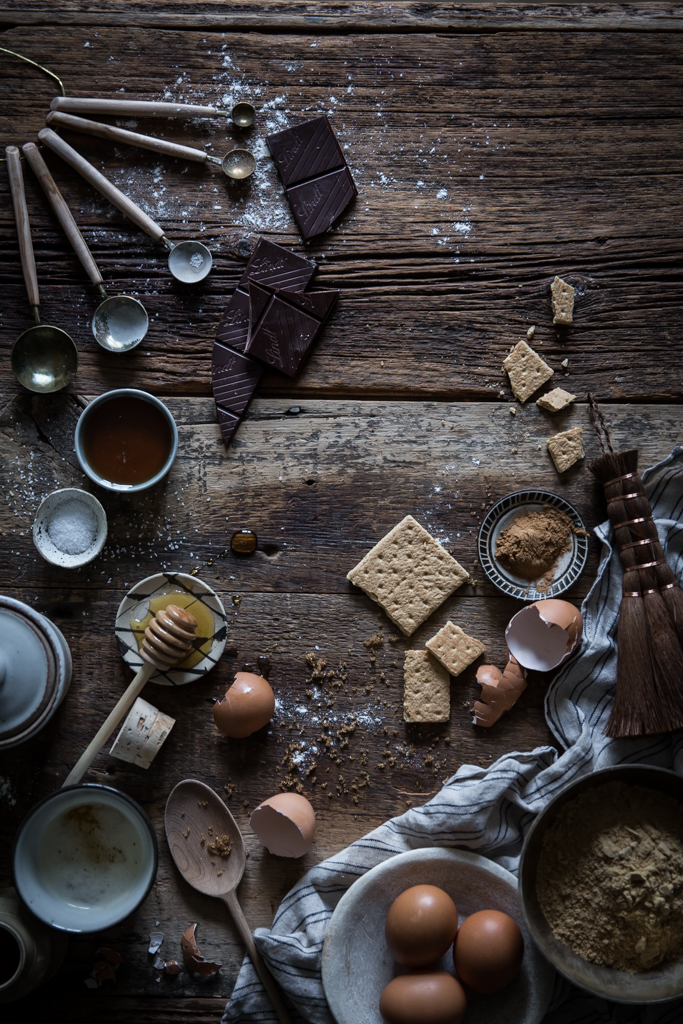 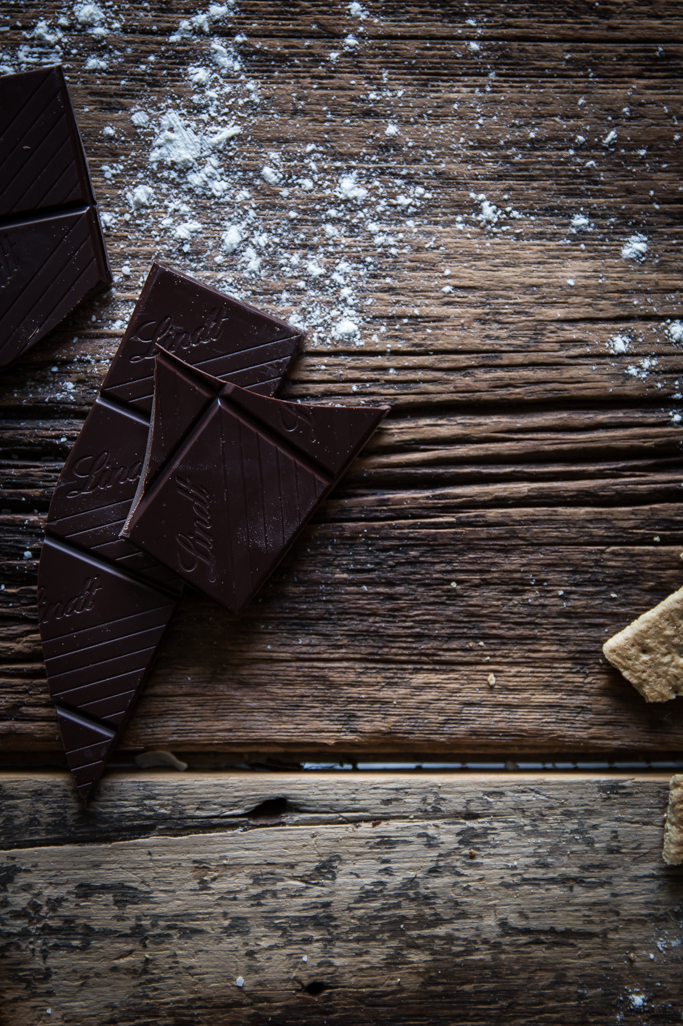 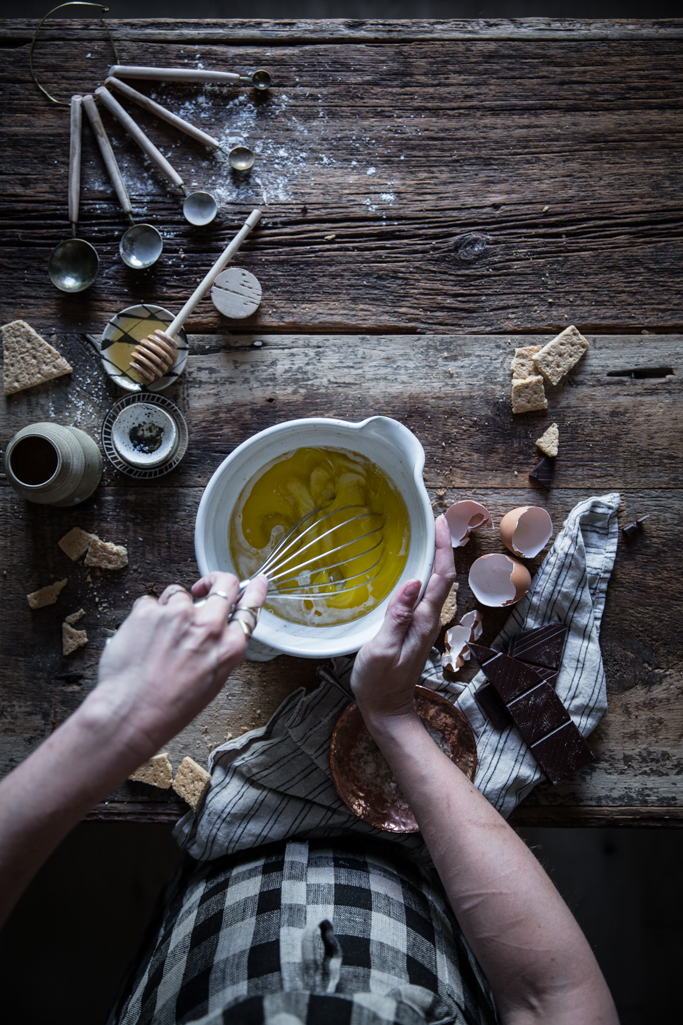 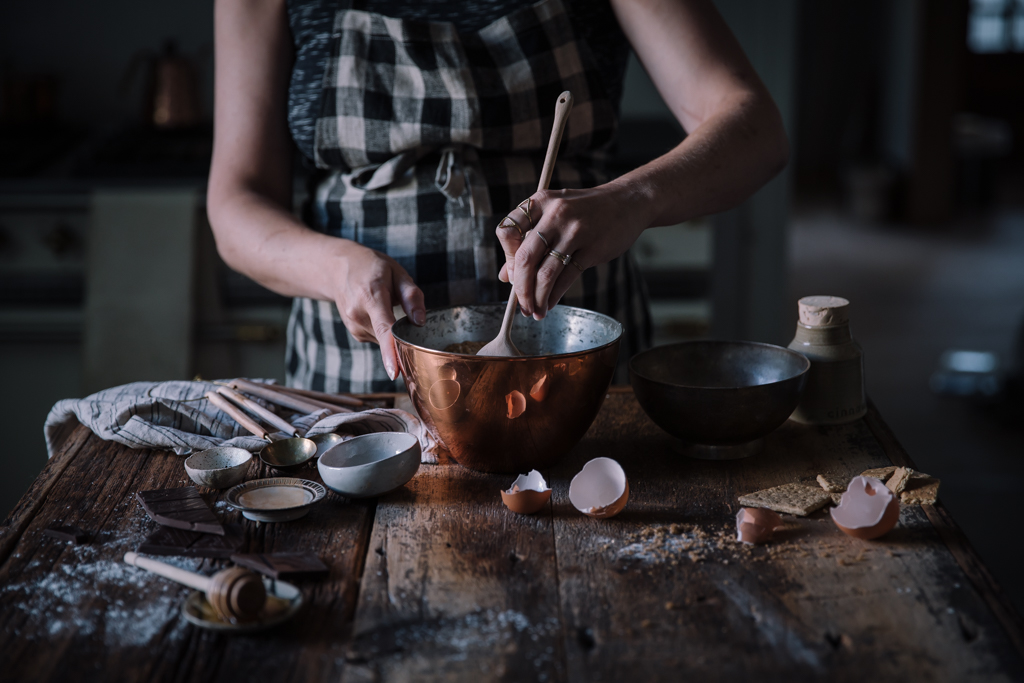 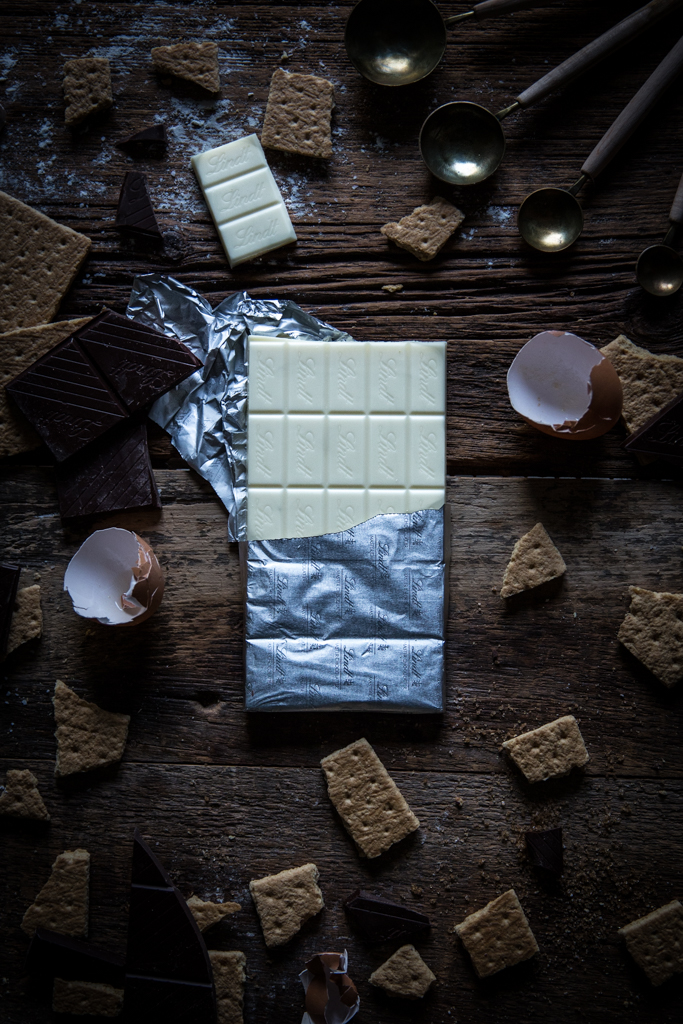 This is my own personal s’mores mythos. My first memory of s’mores was in Alaska. At least I want to believe it was. I remember that there were most definitely chili dogs & yellow mustard involved in this memory. But I can’t say with 100% honesty whether s’mores were. My mind has, over the years, convinced me that they were but perhaps that’s just because it seems perfect. We’ll thank the plasticity of memory and tell it as I remember it with little regard for how it was or wasn’t.

My aunt (my mom’s sister) and uncle lived in Anchorage during my entire childhood, and my mom & I would go up and visit during the long summer days. It was all surreal, the crisp air and a sun that hardly set—as foreign as a land gets to a girl from Tennessee. I was entranced by it all & by story books about sledding huskies led by brazen housecats and polar bear dens carved of glowing, blue ice. I remember walks in the woods behind my aunt’s house where great swaths of magenta flowers enveloped the odd, wary moose mother & her calf. We’d see salmon swimming doggedly upstream to spawn, and her two long-legged standard poodles would lead the charge down the path.

To camp there, in the Alaskan summer wilderness was, to my child mind, a fantasy. Almost up there with s’morffles (s’mores waffles). And so we did. I’d never camped before, and honestly, I don’t know if I’ve camped since unless you count one psuedo-harrowing night “glamping” in a thunderstorm in Ireland. On a lawn. I digress. My aunt, mom, and I pitched a tent by a placid lake, and I later remember the midnight sun peering in through the tent. I have no idea how old I was—maybe 7? We built a fire and made chili dogs and s’mores over it. I always liked my marshmallows completely blackened on the outside. I had no patience for toasting anyhow, and I’d (after a brief attempt at toasting) just light them ablaze and blow them out. Crispy, ashen, and smokey on the outside and molten on the inside with just the very center still a little chewy. Still my idea of mallow perfection.

You can find my old but trusty recipes for homemade marshmallows here. Infuse them with anything your heart desires by simply infusing the water at the beginning of the recipe. We used juniper berry marshmallows for these (recipe coming soon!), and it was out of this world.

And if you’re not American and the concept of either the s’more or the graham cracker isn’t an entirely familiar one, I encourage you to order some graham crackers, stock up on a variety of Lindt Chocolate flavors, and try this out ASAP. It would make a particularly awesome hands-on party dessert because guests can select their chocolate flavor of choice from a “chocolate bar” (get it??), another could be on waffle griddle duty, and yet another could man the torch to toast the mallows. Don’t want to bother with a torch? Just toast them under the broiler, no problem. But a torch is awfully fun… 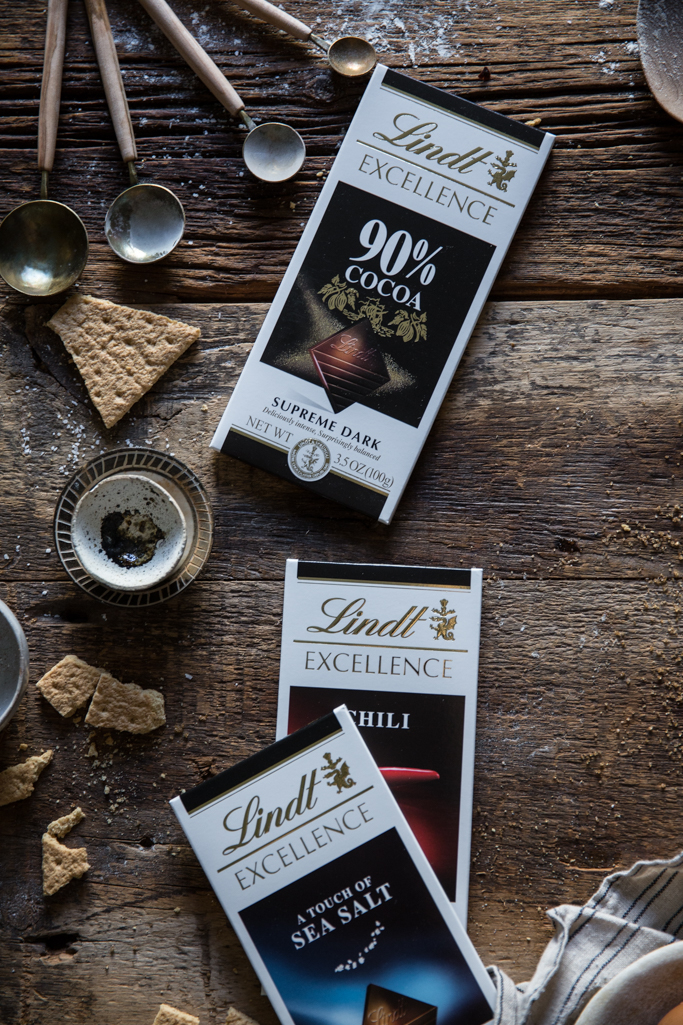 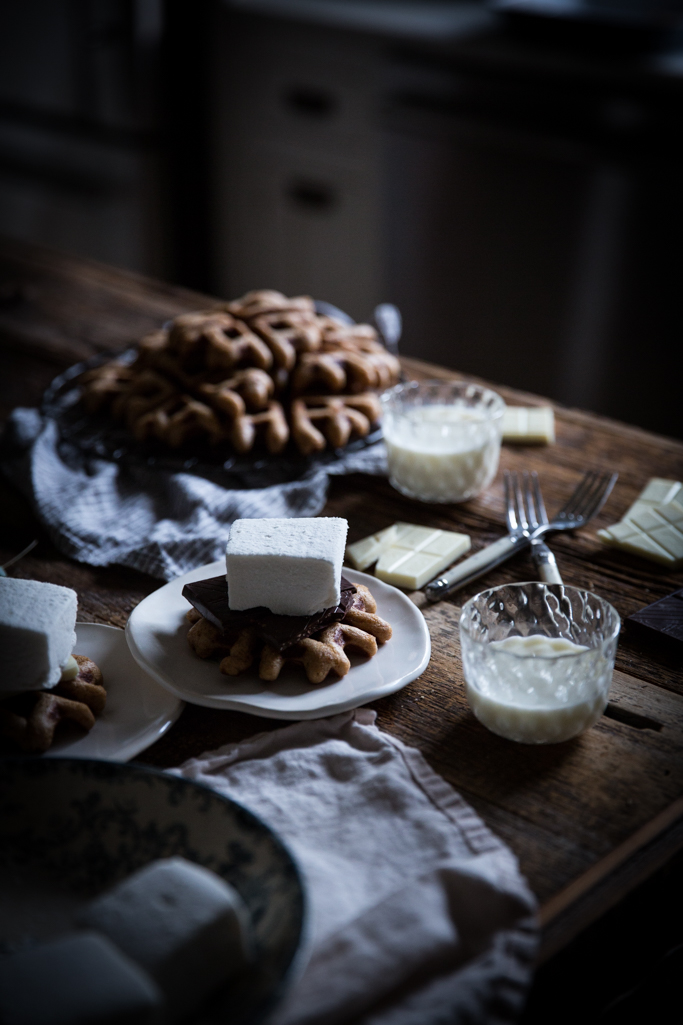 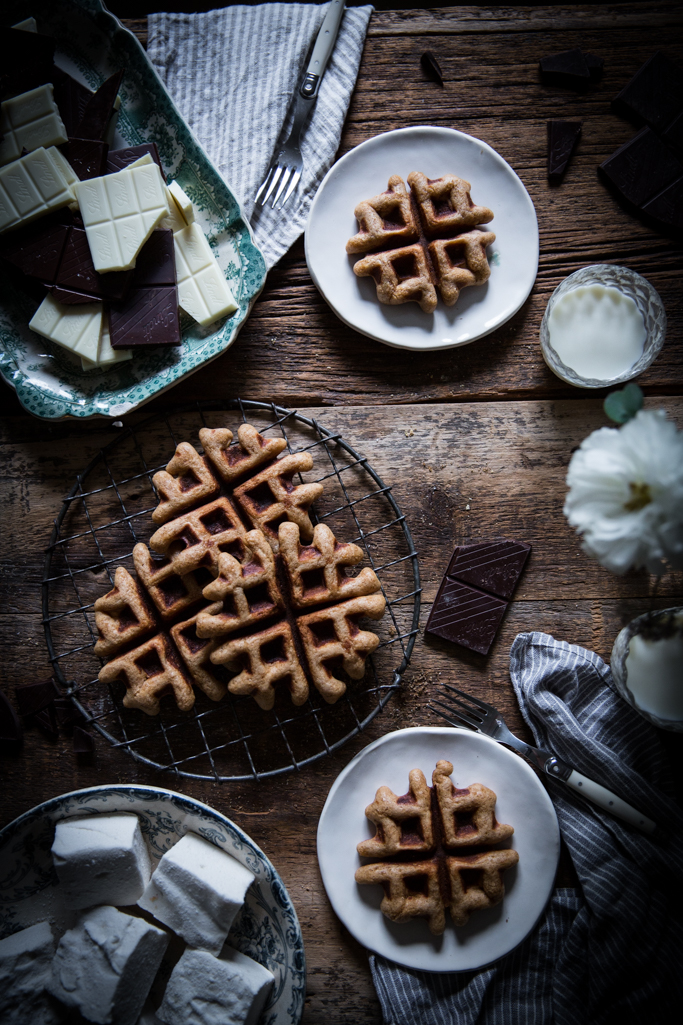 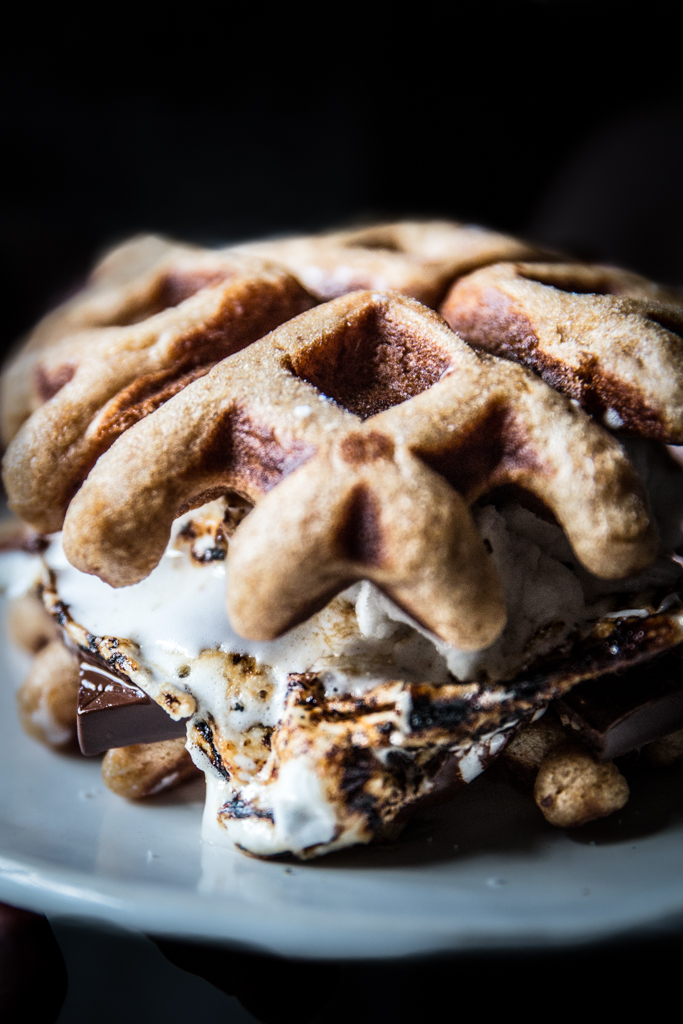 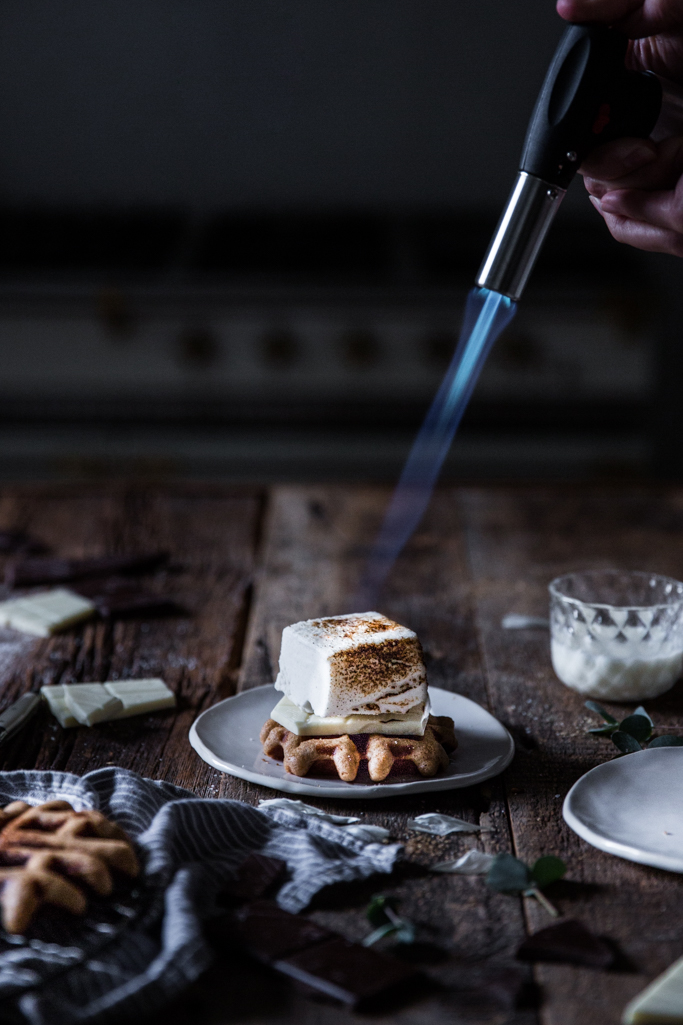 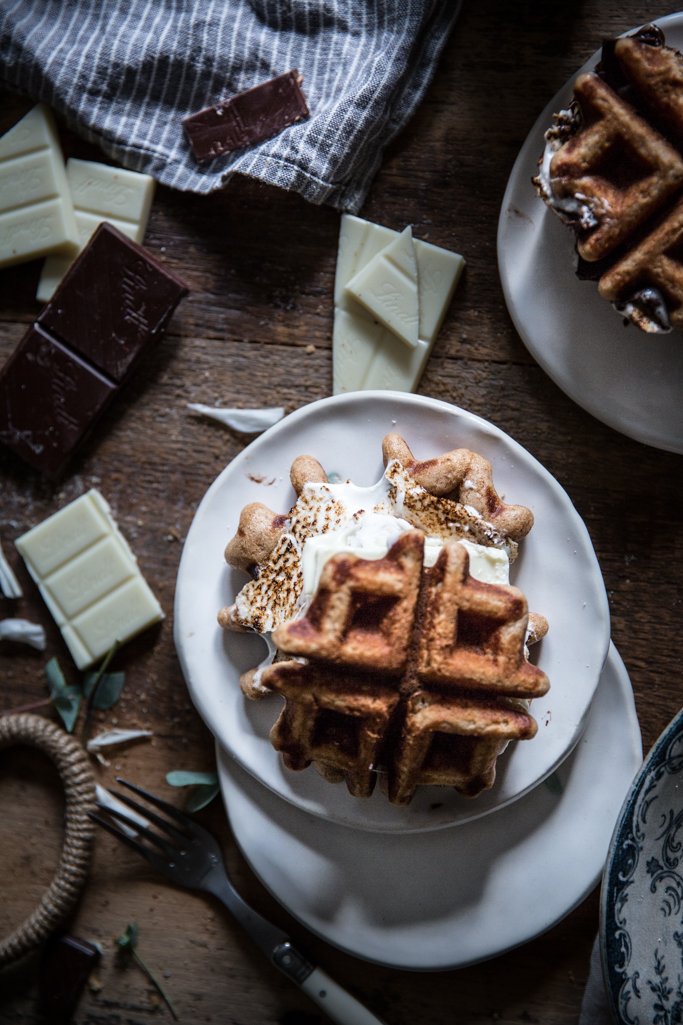 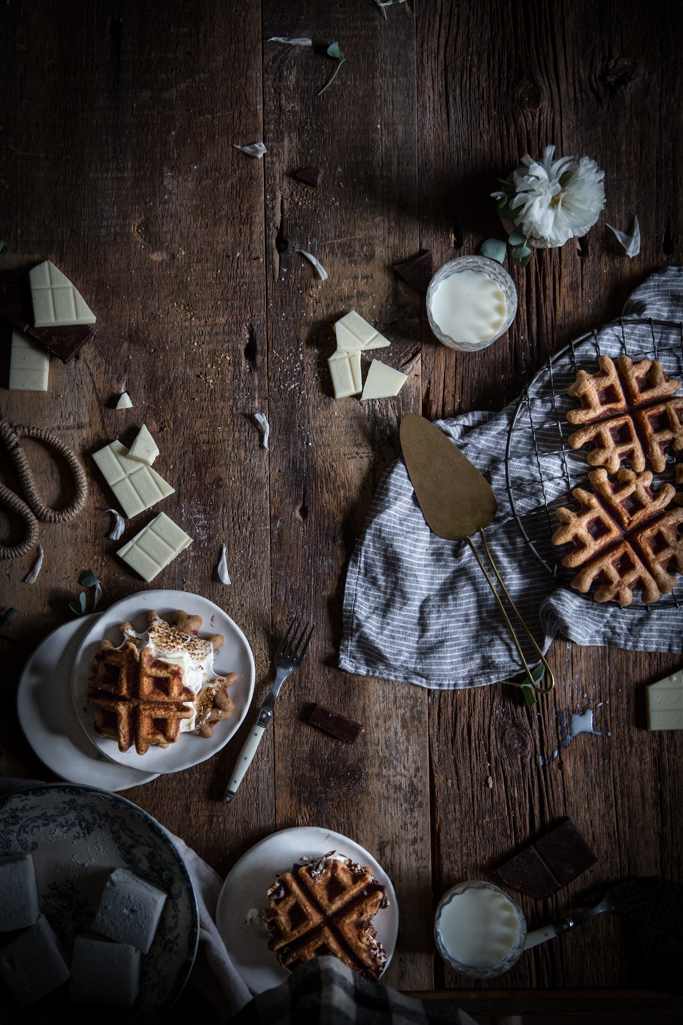 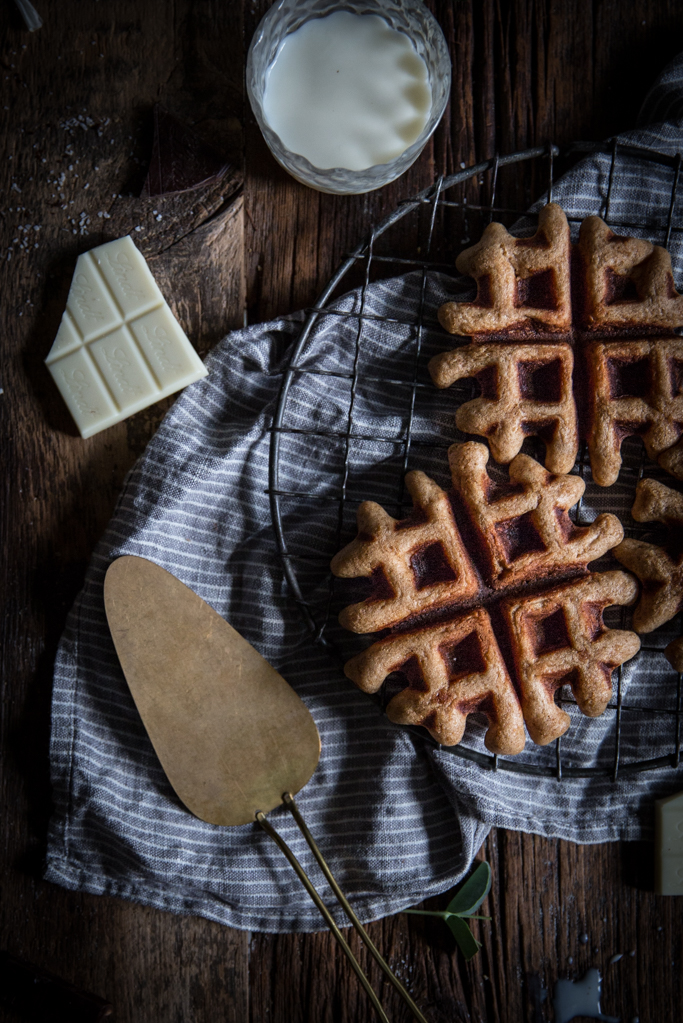 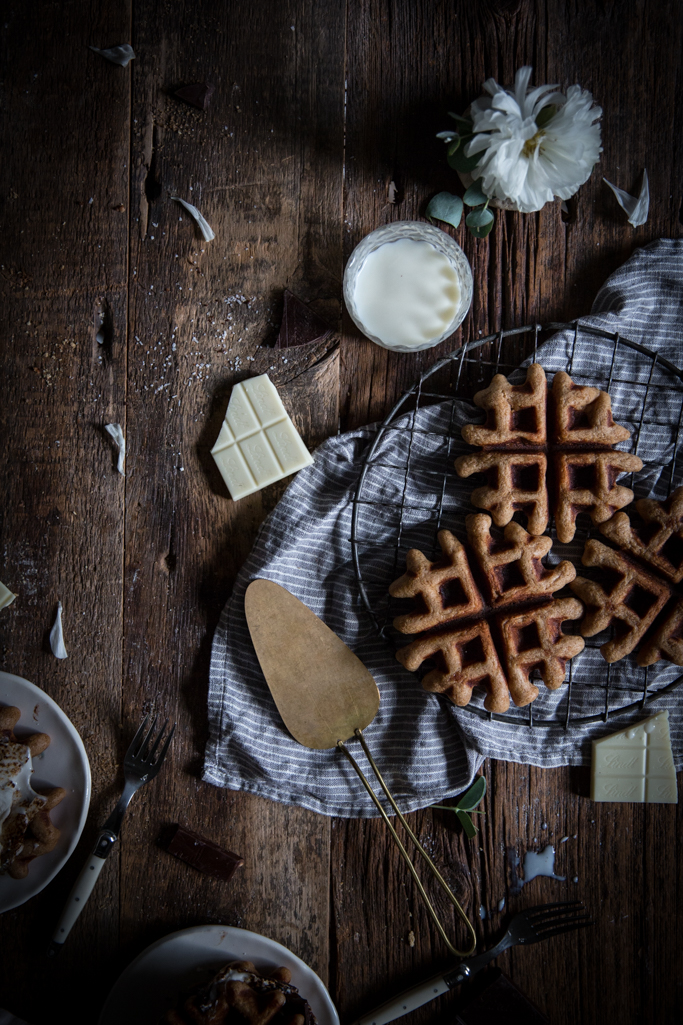 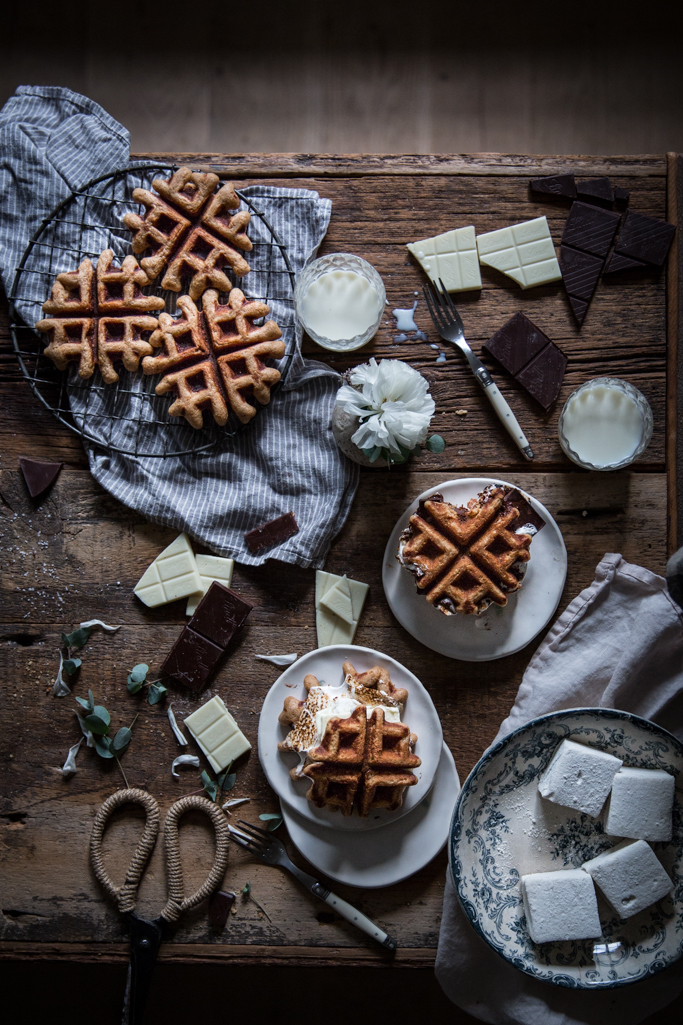 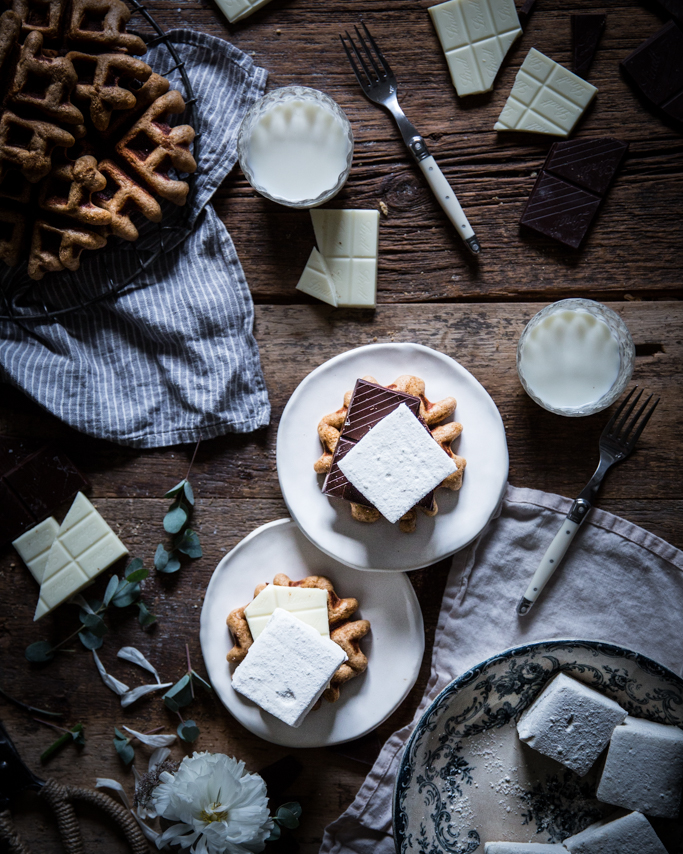 For Waffles
For Assembly
Tools

A thanks to Lindt for sponsoring this grown up palette meets childhood fantasy recipe & for always keeping us in a good supply of white chocolate truffles! All opinions, meandering stories, and recipes are my own.