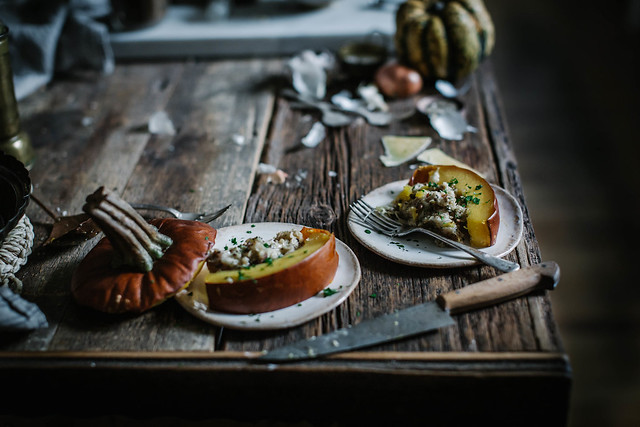 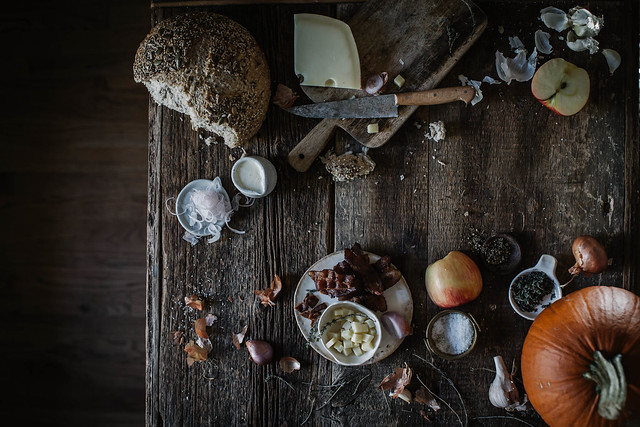 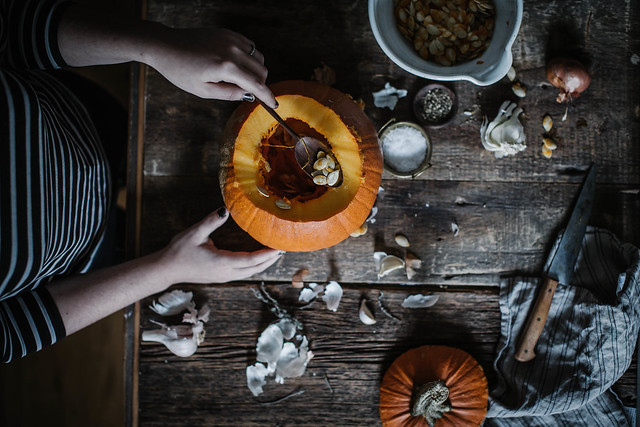 This is quintessential fall. As winter most finally creeps in and we celebrate the last of the fall holidays tomorrow, this dish serves as one great salute to the autumnal months—the rusty hues, the smoke, the firm orchard fruit. If you’re one of those (and I suspect many of you are) that has your Thanksgiving spread thoroughly mapped at at this, the 11th hour, tuck this recipe away for next year. Or for later this week. But if you are looking for a last minute idea to enliven your table, this is just the thing. It’s the sort of dish that becomes a tradition, and it’s a great balance of indulgence as well as the nutrition of whole grains. I’m one of those that will eat absolutely anything in moderation so long as I know where it came from. And I’m thoroughly, so thoroughly, for carbs. I couldn’t live without bread, pasta, farro, and risotto. Well, I wouldn’t much want to. According to the  Grains Food Foundation,  a diet balanced with carbohydrates is proven to reduce cognitive decline. Their program on the relationship between grains and neurology, Grains For Your Brain, has even more information on the benefits of whole grains for your brain matter. Score, bread. Now if someone could just prove that bacon will make me a genius, I’m set.

This is the time of year where we talk about gratitude. Thanksgiving is impending and that’s what you do. Tomorrow, I’ll sit around the table with my clan, my people, my blood, and we’ll say what we’re grateful for. When I first got sober, I’d write five things each morning that I was thankful for. A gratitude journal. Just five things. They didn’t have to be huge. They could be down right inane. But if I was grateful for it, it could make the list. One time I made a collage on a notebook. Collage is symptomatic of new recovery. At least for me it was. I was regaining movement in my creative legs, desperate to walk again, and I was just beginning to wiggle my toes. It was feeble and silly and I was grateful for it. I had a bed to sleep in. Grateful for it. Each morning I would collect those marbles and lay them out in front of me. One, two, three, four, five. I’d roll them over in my hand. Hold them up to the light if only for a moment. And then on with my day. Gratitude isn’t just for the perceived weak among us that might fall if we don’t cling to the good stuff. It’s for everyone. Gratitude keeps us from that distasteful habit of the unexamined life, making a victim of ourselves. It holds in focus the potentially taken for granted. It forces us to dig through shit days to find their redeeming qualities. It’s energizing and life-giving. It isn’t Polly Anna nonsense. So long as I’m on this side of the dirt, it’s a good day. An old man said that to me once. It stuck. And I agree.

This week was trying. I was in my first ever real, live car accident. I’ve bumped into my fair share of non-moving, inanimate objects in my driving career. The odd wall, post, other parked car. But I had never been in one of those glass shattering, metal twisting, slow motion affairs. Until a few days ago. I was driving back to my hotel from work, from a shoot. It was raining, dark. Prime time for such things. I was listening to my new favorite podcast, Serial, and crossing an intersection, a green light, only about two blocks from my hotel. I’d forgotten my purse in the studio, had run back inside to get it—just the few seconds needed to put me in that spot at that time. The other driver was coming from the hospital, she’d been visiting a relative that was, incidentally, in the ICU due to a car accident. I didn’t see her coming. She broadsided me, my eyes widened, and then the great metal post of the traffic light promptly arrested all motion, and my car smashed unceremoniously into the post all steam and twisted metal. One of my headlights was on my wind shield. I couldn’t breath. I was frustrated that I couldn’t breath. My hands shook. I started to cry. I was extra frustrated that I was starting to cry. I kept thinking that I wasn’t the sort of person who loses her shit. But I did, for a moment. I had the presence of mind to get my camera out of the car. And then I wandered aimlessly. I just kept thinking that I wanted to get away from the car. But I didn’t know where to go. She kept asking if I was okay and saying she was sorry. I felt bad for her. And I told her I was fine. And I was. My car was pretty much trashed. But I was fine. Not a scratch. And for that I’m grateful.

More than that, I’m grateful it happened. Not because it was some great, character building experience. Maybe it was, but frankly it just wasn’t that big of a deal. It was scary, then it was disorienting, then I cried in the shower and yelled some very choice words very loudly upon getting back to my room. Then I went to a great dinner with my colleagues. And on to sleep & work the next day. Just like that. It was nothing. I’m grateful it happened because it was supposed to happen. It (both literally and figuratively) changed some small trajectory. Little plots changed. I may never know what or why or how. But each event, from getting stuck at a traffic light to running head long into one, changes a few second of your day. Just like forgetting my purse changed mine. And for no reason other than I choose to because I’m fond of how my life goes when I believe such things, I believe it’s meant to be. I believe in the orchestra. And that was a fascinating little crescendo.

I’ve been turning the moments during and after impact over in my mind. It feels like some strange gift to know that part of myself now, to know who I am when I think, if only for a moment, that I might die. It wasn’t as bad as I imagined it would be. And I’m grateful for the reminder that these things happen. They happen all the time. And sometimes you aren’t lucky and you go on to a different plane altogether. Or it’s someone you love and you’re left with a hole. You can’t live afraid. But you can live with a keen awareness that you’re not always going to like the song but if you learn that thing I’m always going on about, amor fati, that thing Nietzsche went on about,  you can see it all—the pain, inconvenience, and downright debilitating sorrows of your life—as part of the complex, symphonic novel of being. And, somehow, find it in yourself to be grateful for being alive to hurt and fear and worry at all. Not because you should. It’s not about should. But you’ll feel better if you do. And maybe it’s facile or fit for swine, but I think that serenity & dare I say, even happiness (whatever that is, I know, I know) is a worthwhile goal. I don’t want to be tangled up inside. I just don’t.

1. Not dying in a car wreck. Awesome.

2. My friends are the most talented, good-humored people I have ever known. And I have more of them than I ever imagined. It’s ridiculous.

3. I love my weird, patchwork career. It stresses me out because I say yes too much. But at least I have things to say yes to. And I get to travel. Dream come true.

5. My family. An obvious one. But I really, really love them and they love me back. That’s not a given in this life. I’m grateful for it.

I’m also grateful to the Grains Food Foundation for sponsoring this post and allowing me to create recipes, photos, and ramblings for you all. Seriously. Do check them out. They’re fighting the good fight for carbs. I can get behind that. 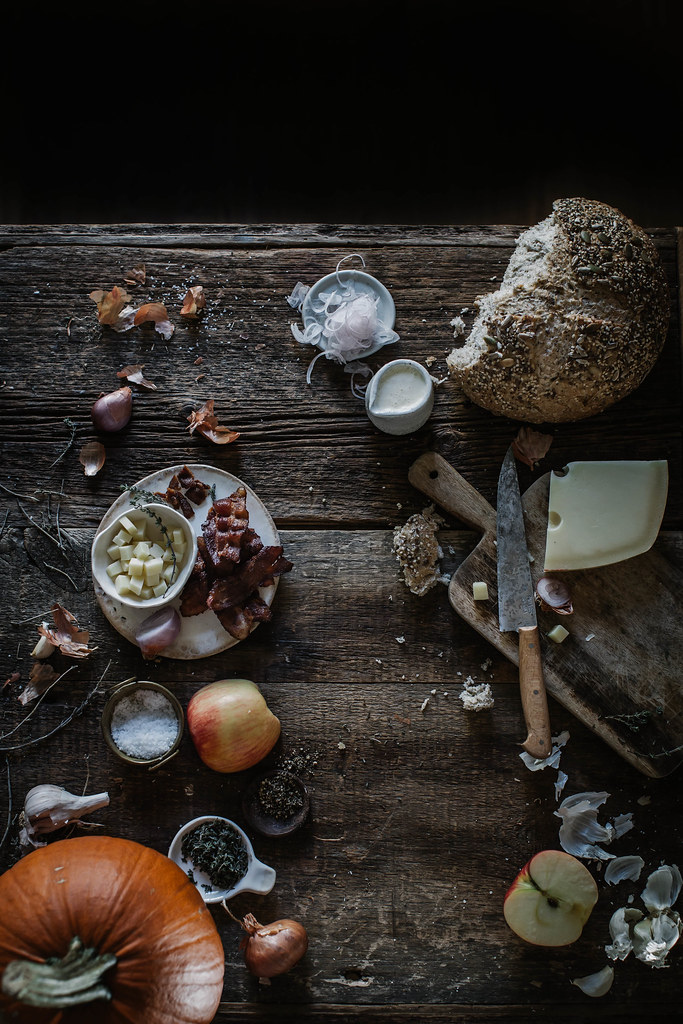 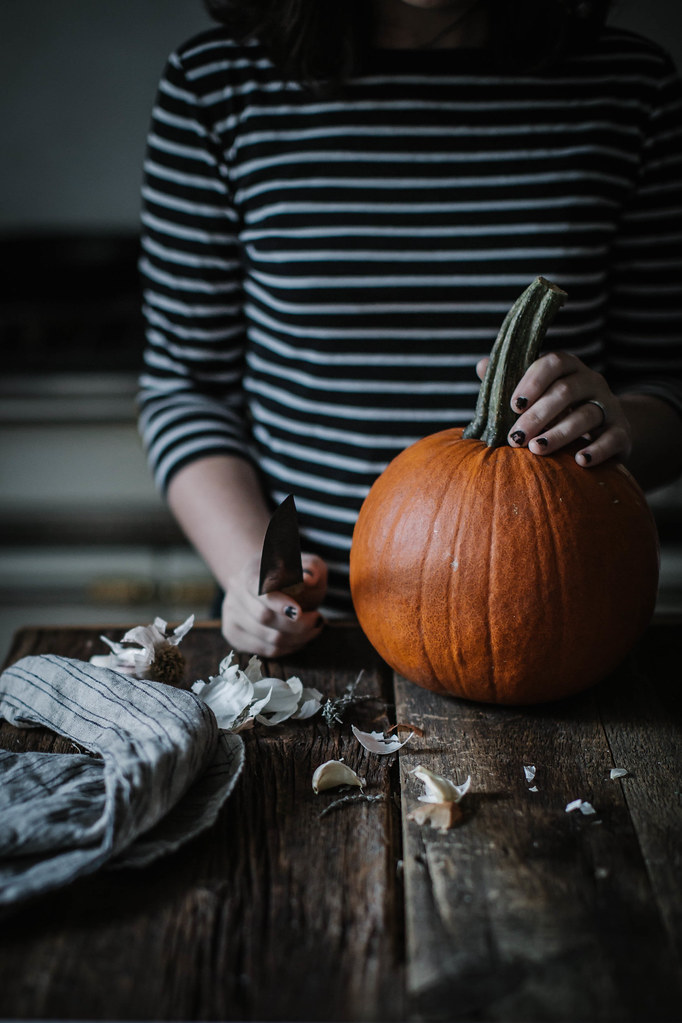 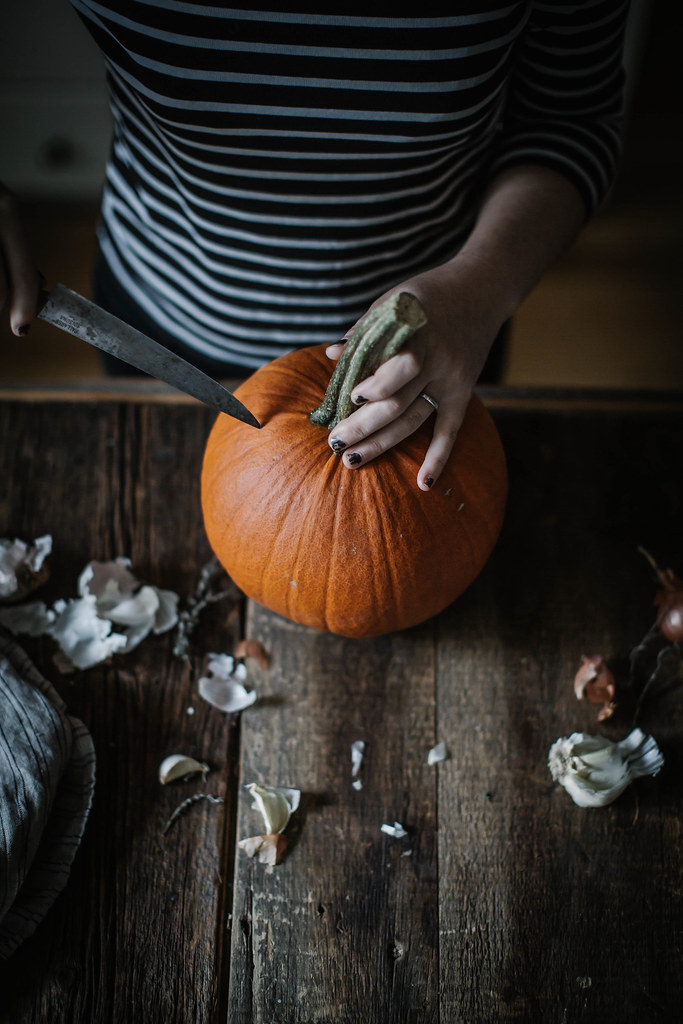 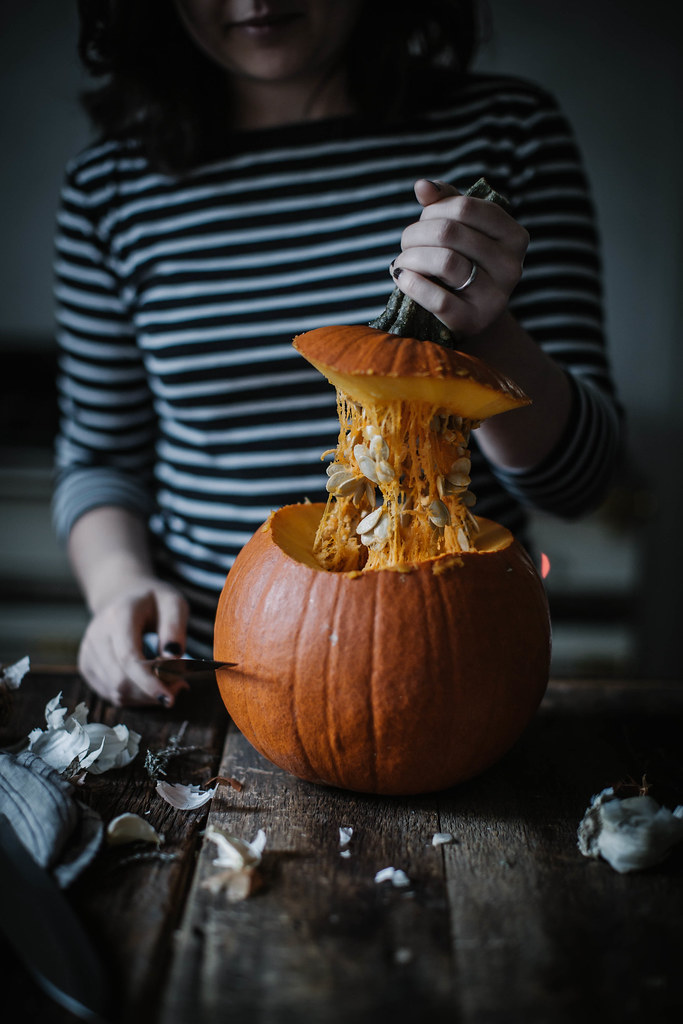 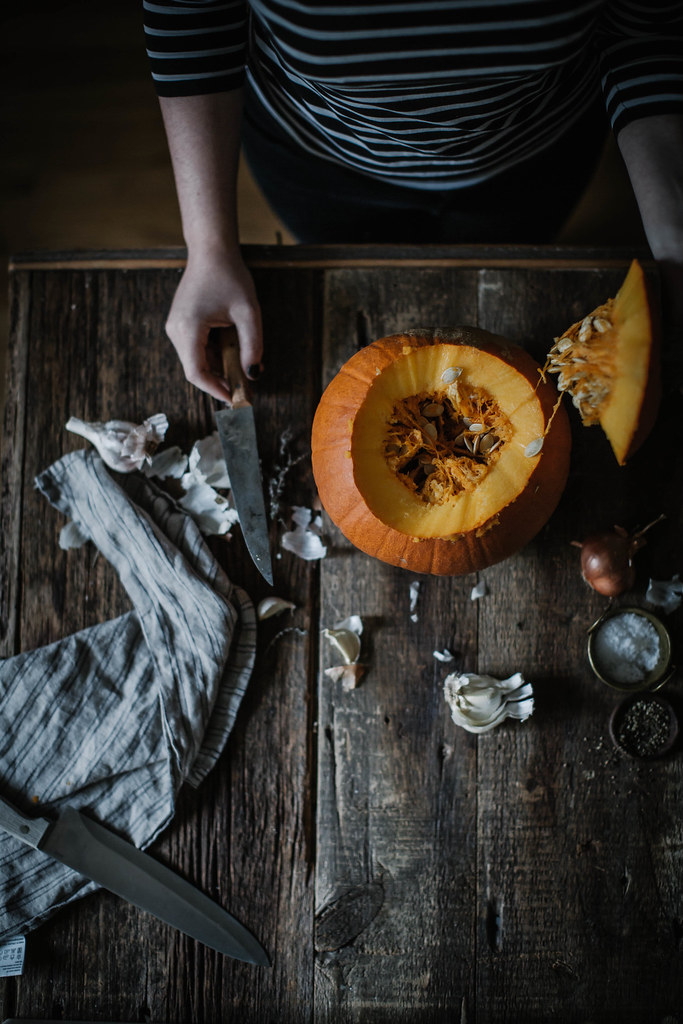 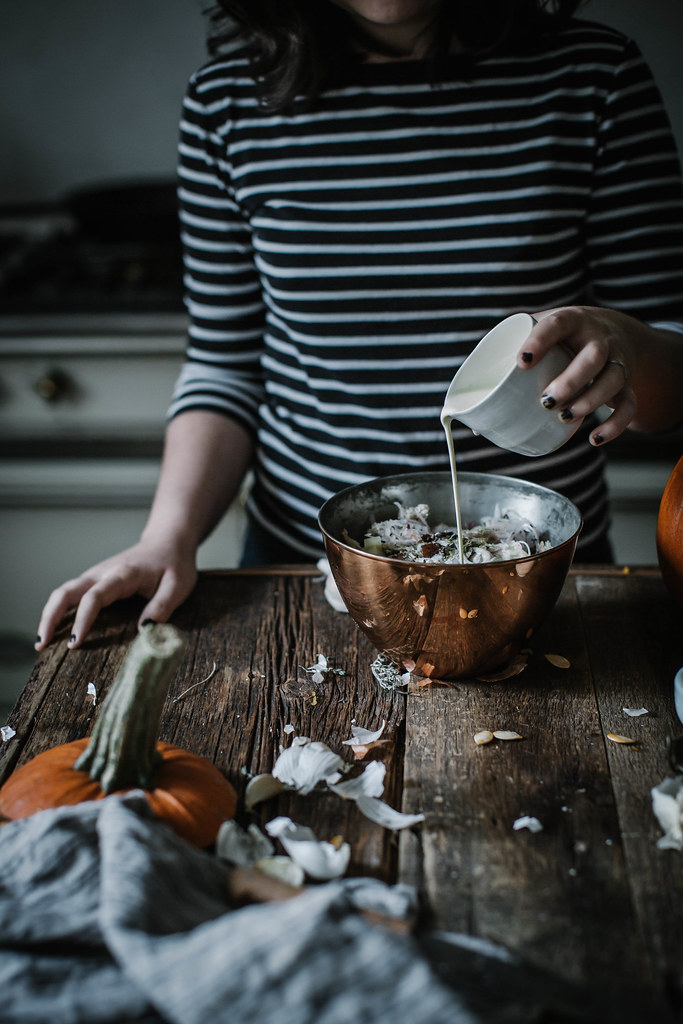 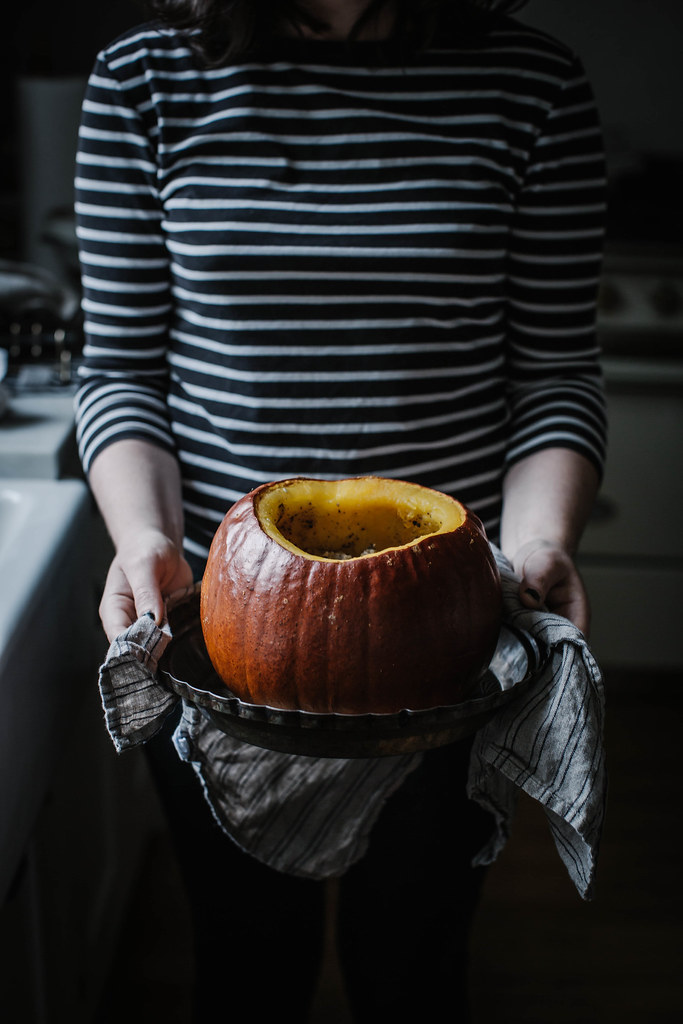 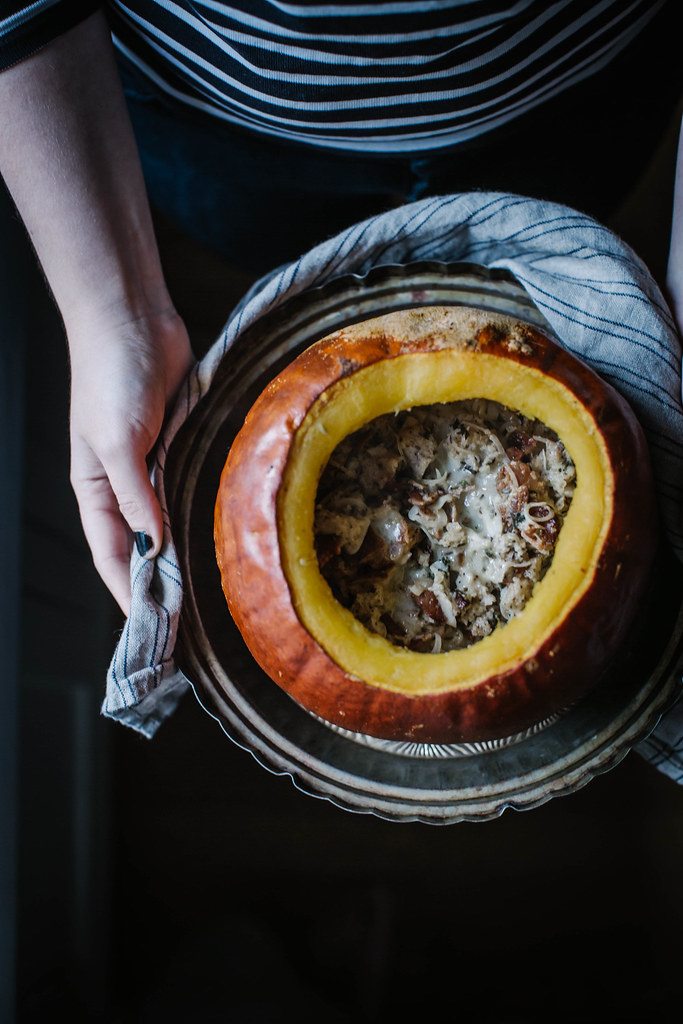 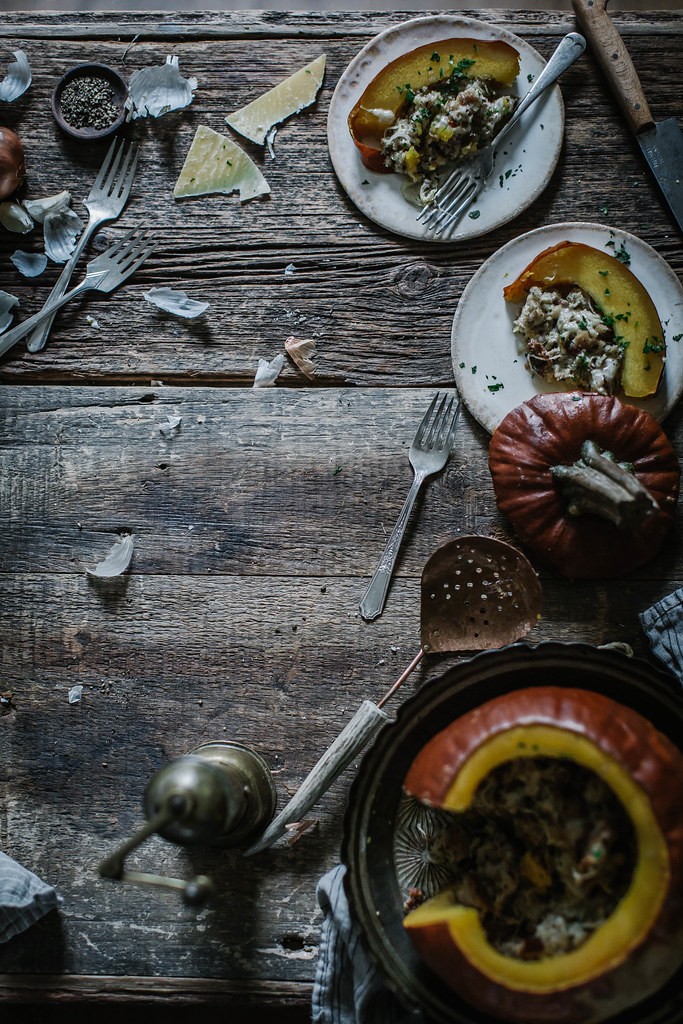 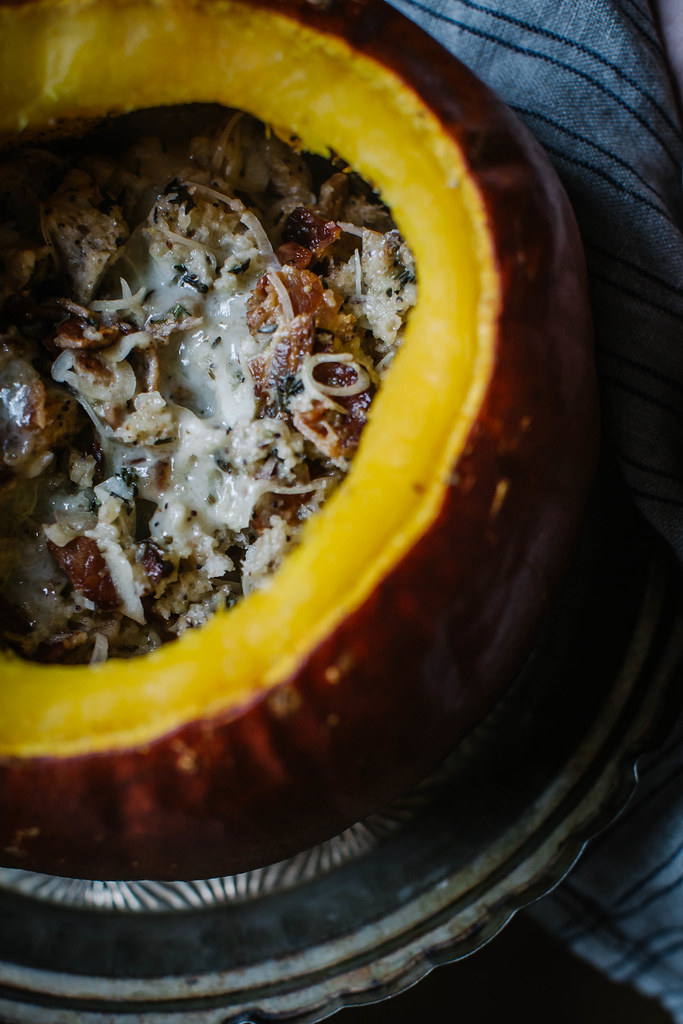 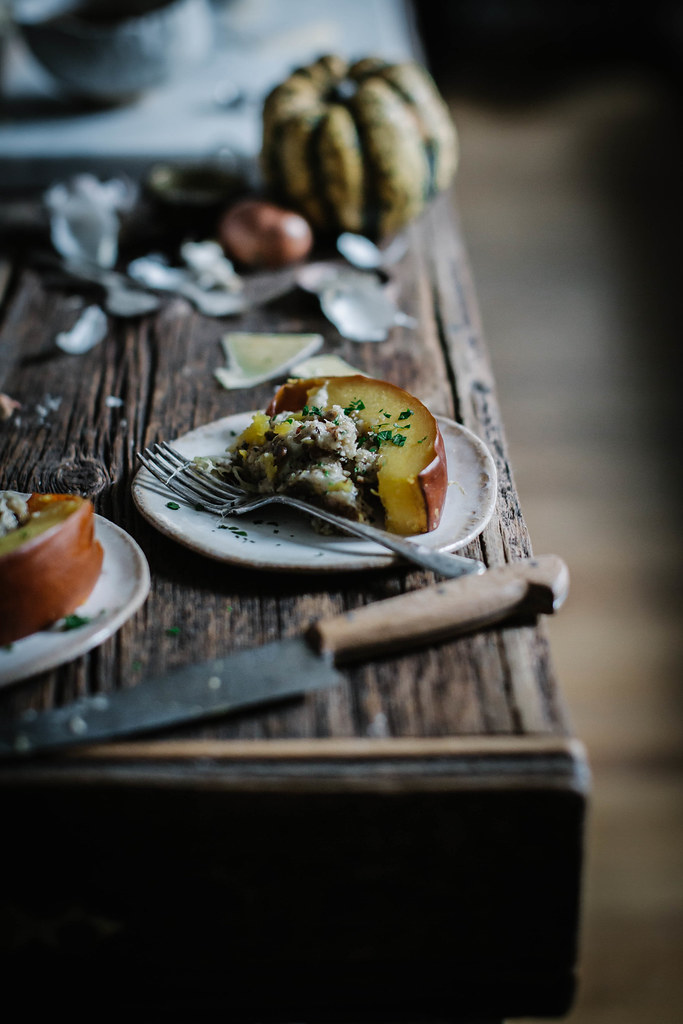 Recipe adapted from Dorie Greenspan. The addition of apples gives hit a pleasant crunch and hint of sweetness—it's fall tucked inside autumn ensconced in the smoke of burning leaves. Which is to say SO fall. It makes a striking centerpiece for Thanksgiving or Halloween and a great dinner with a green salad any night of the week. You can experiment filling it with other grains like rice and farro too!