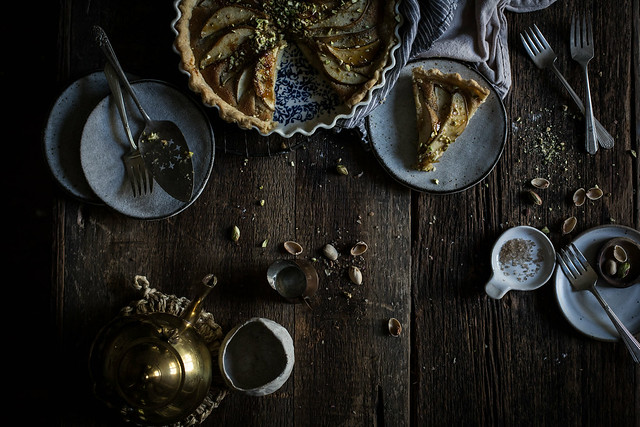 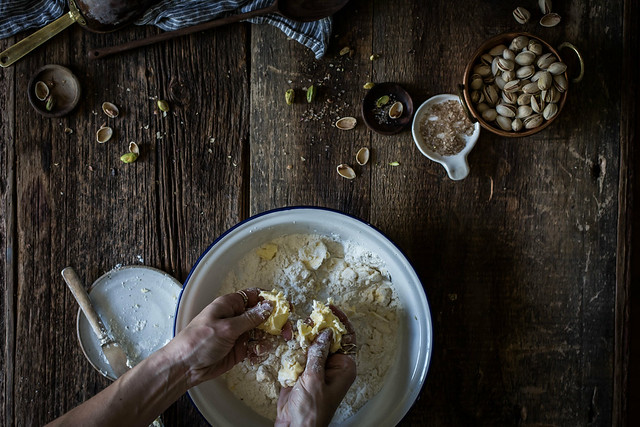 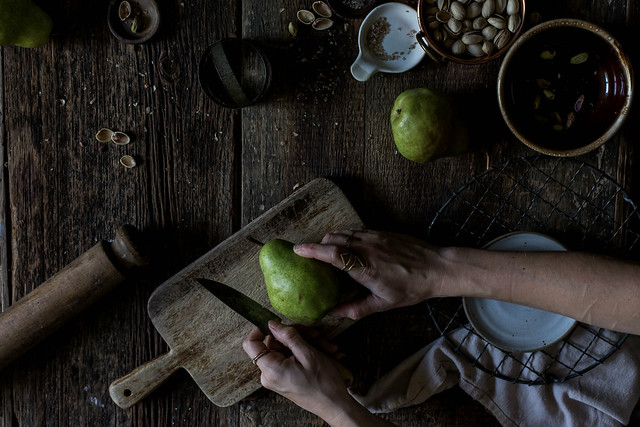 I have my mother’s hands, pronounced veins & tapered fingers. My hands are tools. They scratch and pry, knead and rub. They make. I too often use them as oven mitts. They’re devil’s hands & dirty. They like to touch and be touched, and I like to think my fingers would have been very good at piano. I, however, can’t play any instrument at all. In a different life, I’d be a pianist that spoke five languages. But I also can’t speak a foreign language. So. They aren’t pianist hands. They aren’t polyglot hands. They’re just kitchen hands. Kitchen hands that want to touch everything. The flesh of fruit and sandy almond meal. The smooth shells of pistachios, pried open for the meat. Eat one, toss one in the bowl. Cream the frangipane. Run a finger along the edge of the wooden spoon. And lick it off.

To touch & taste are the world to me. I’m hungry, deeply and always. It drives me forward without always knowing where I’m going, that hunger. I need to be forever creating and consuming, as if the mad accordion that is the stars all at once (because what is time) fleeing from and collapsing into the heart of black hole is at work inside me. It’s probably at work in us all. Maybe there’s a sorrow behind the hunger though lately I see nothing but light. There are fantastic orbs, bundles of scattering light, just pinging around inside me. I’m so very happy these days. 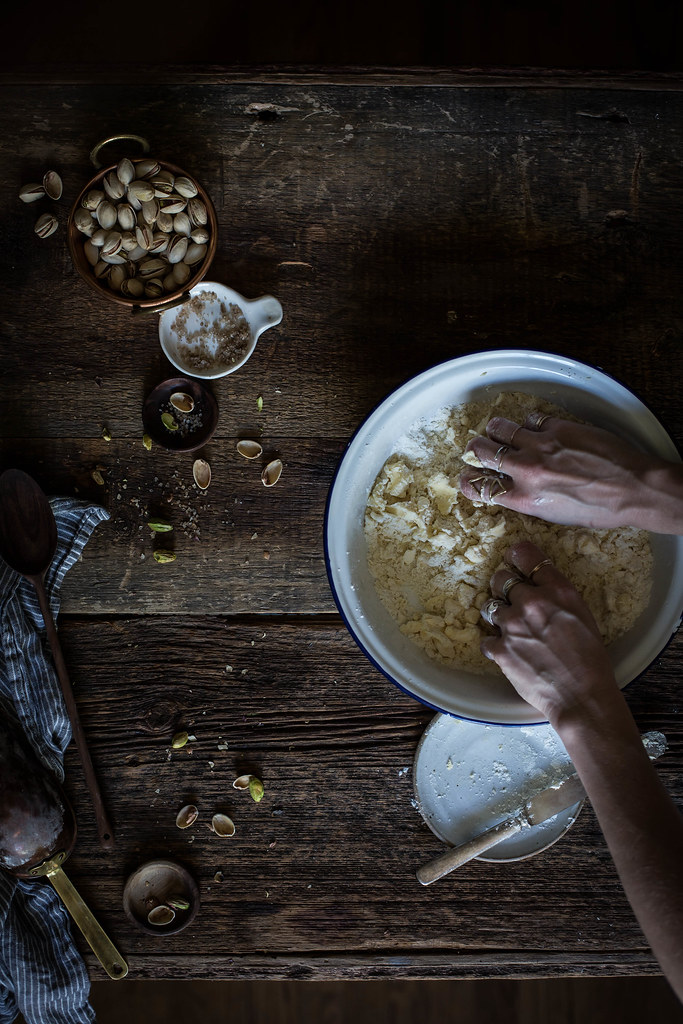 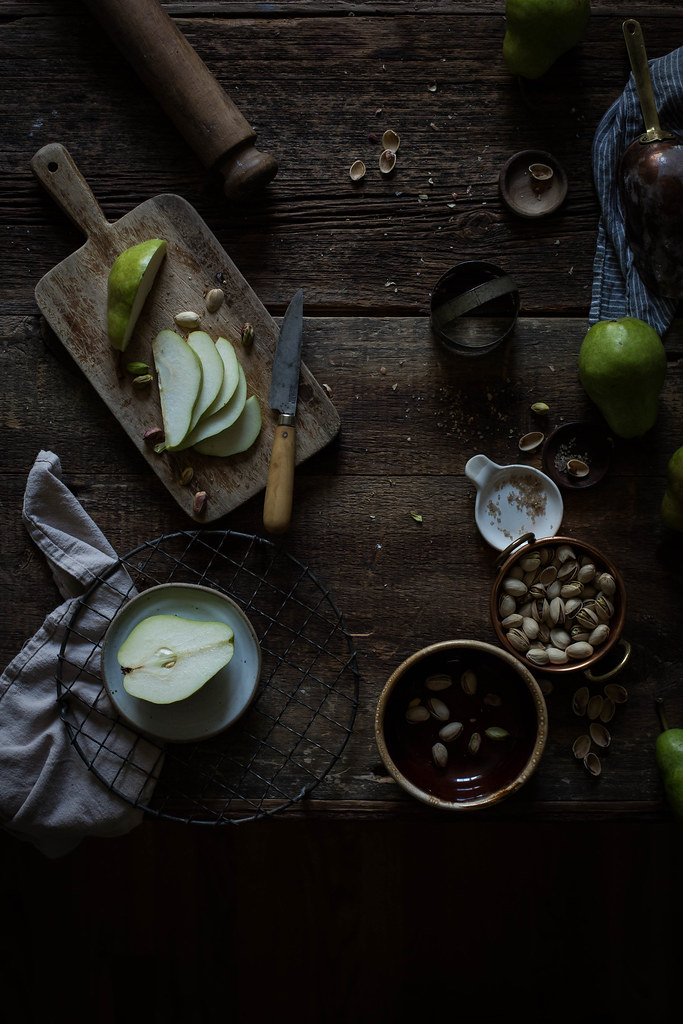 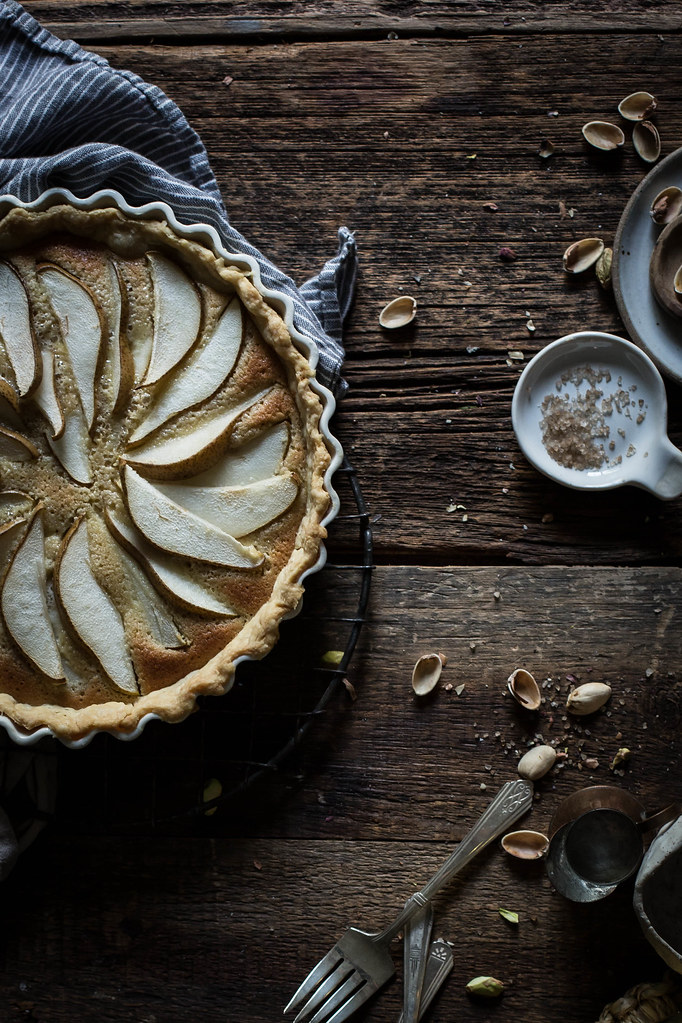 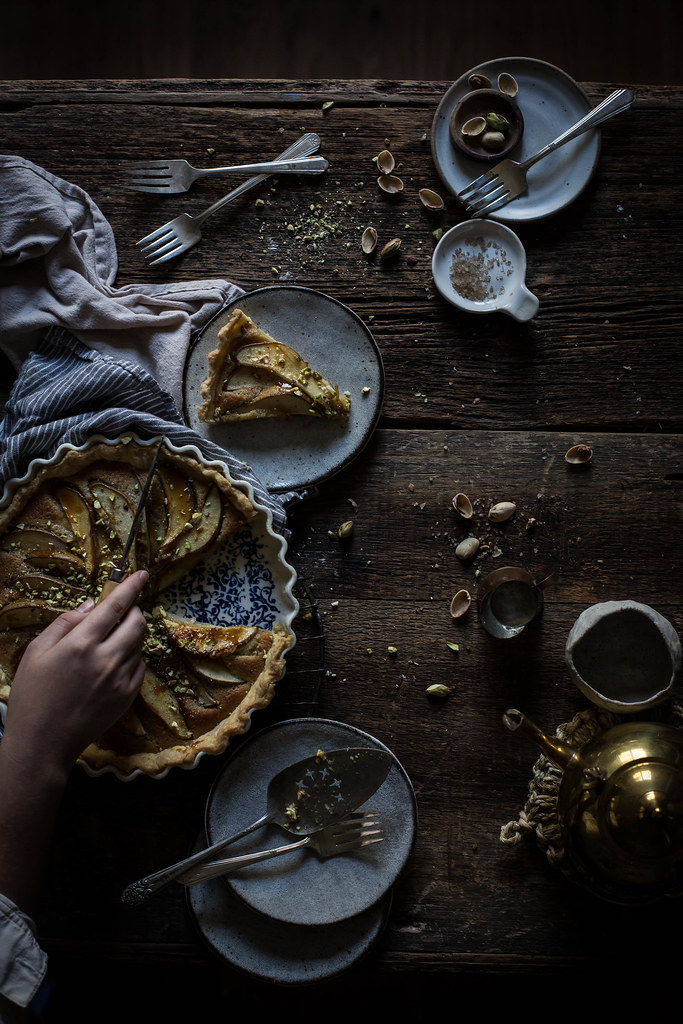 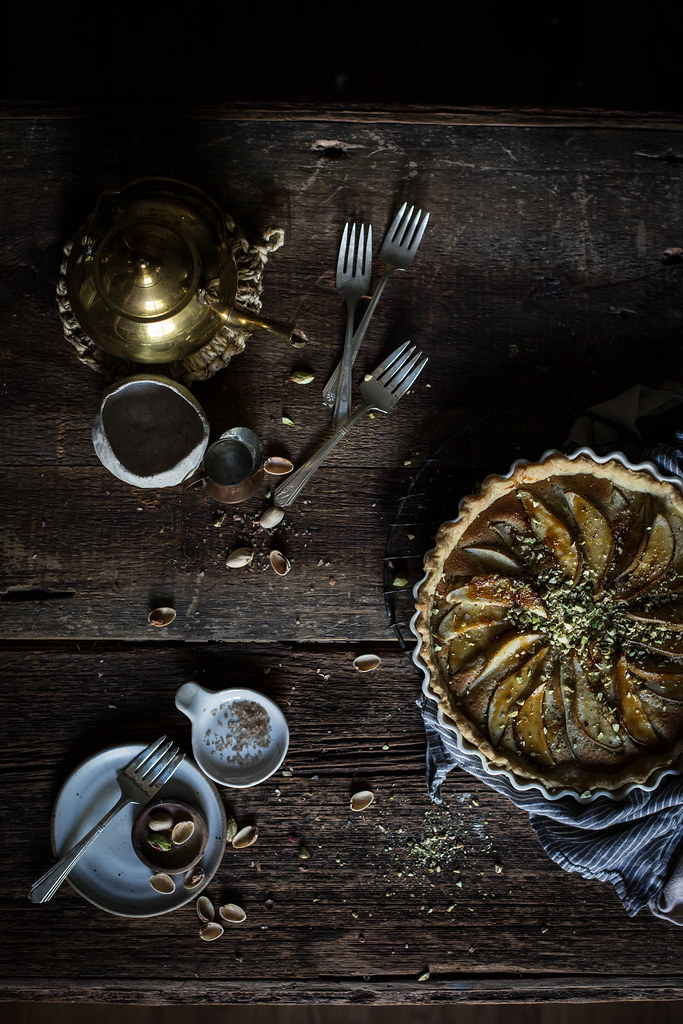 And yet there’s a darkness always present in my work. Someone said recently that a photo of mine was full of sorrow. At first I laughed. How could a lamb chop be full of sorrow? And yet, there it was. Undeniably, over and over again. My work is tinged with some foreign sorrow. A sorrow that, these days, feels alien. It’s the shadow. Last night I awoke three times sobbing in my sleep. It was bizarre, and I do not know what haunts me. I wake up and see nothing but light. I cannot know myself. Most days, I don’t care to try. I’d rather be. In the waking world my feet are in the dirt, and my skin feels like it’s rippling electric. My heart and mind are consumed by work &, jangling elation.

But it would seem at night I float, from time to time, into dark, deep water. All I know is that no waves can wash me out to sea when I’m cooking, writing, shooting. Not when I’m working,  not as long as I don’t stop moving. That’s what I tell myself, and it seems to work. And that is why I love my hands. That is why I love to touch. More dimpled pears, more papery pistachio. More skin. More here, more now. More happiness. The darkness is such an intrinsic part of me it infuses my work even when all I can see is brilliance & joy. But for now, I will leave it for my sleep and while I wake, I’ll enjoy a cup of coffee, so juicy, and fall pears with warm almond frangipane in the only pastry crust I ever make. 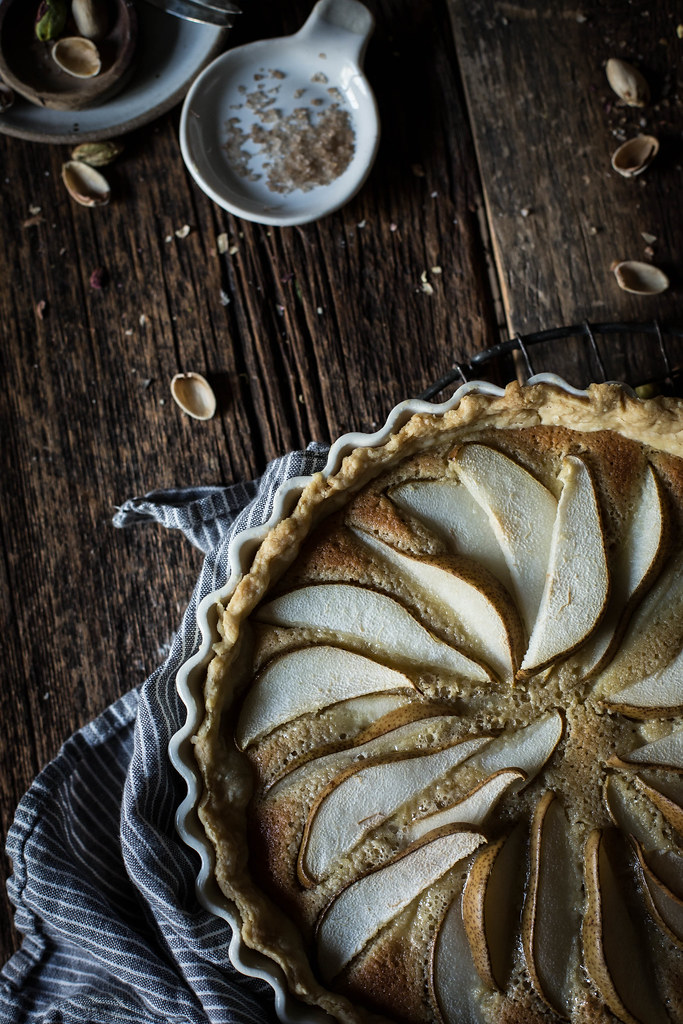 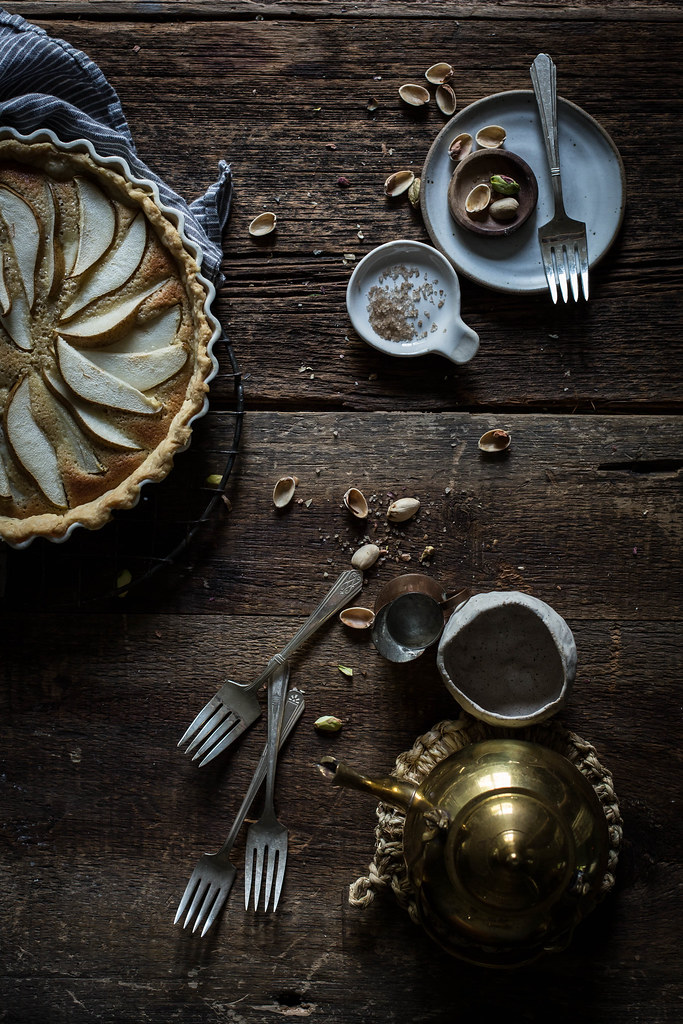 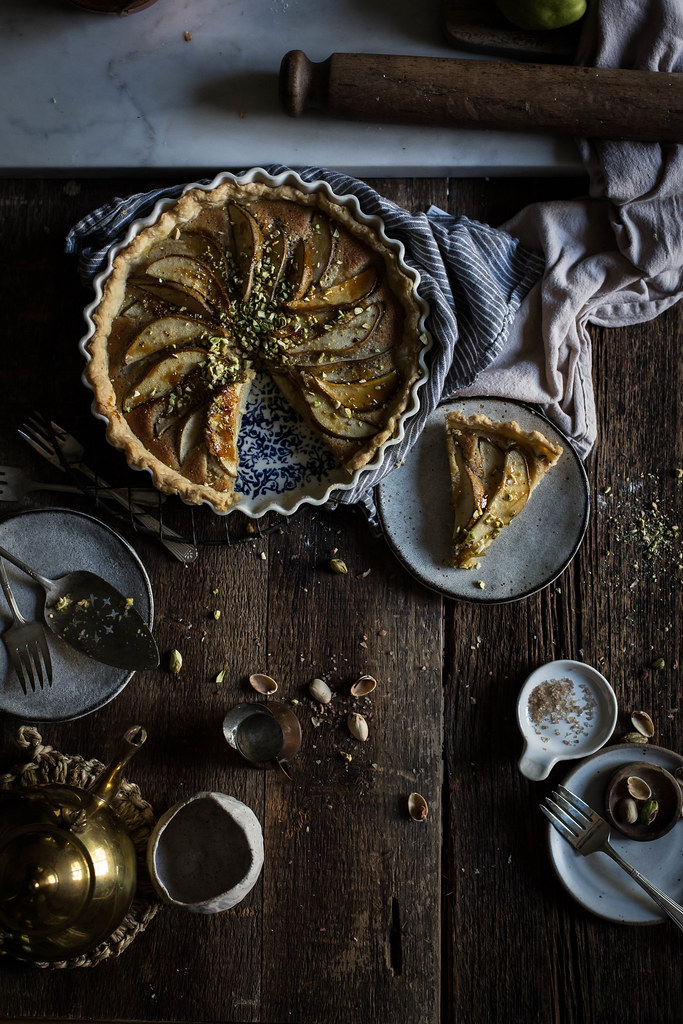 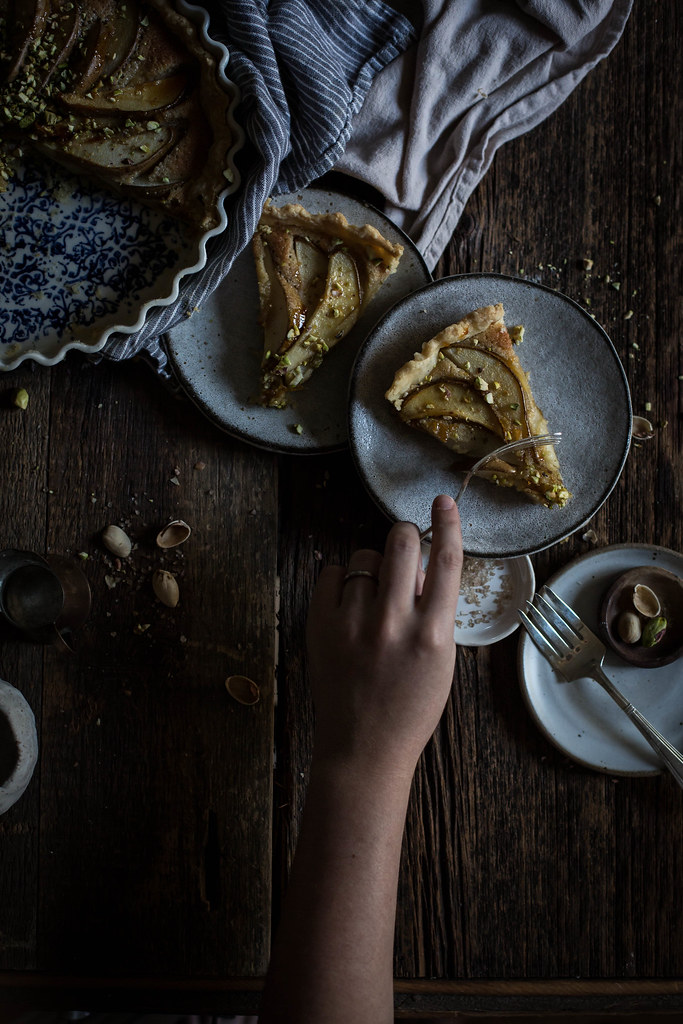 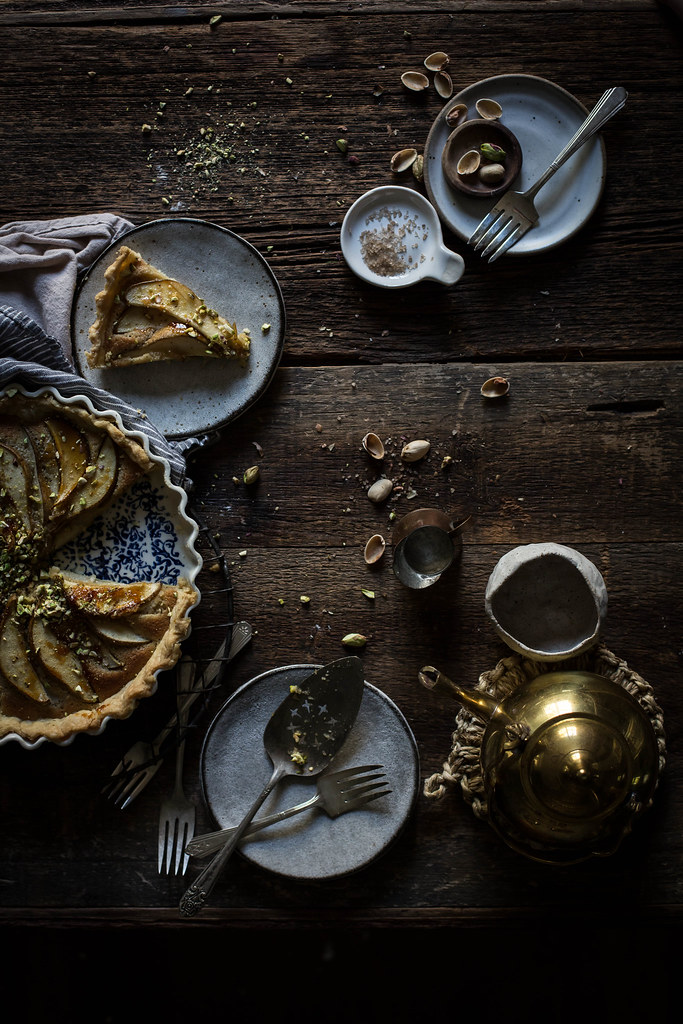 This recipe is adapted from Izy Hossack’s new cookbook Top With Cinnamon and it’s just so brilliantly simple. Once it was there, irrevocably sitting on my counter next to the chemex & my favorite cups, I felt so civilized. Izy makes them in little tartlets on rounds of wholemeal pastry crust. I opted for one biggie with my oh-so-southern all purpose flour & butter crust. Mostly because I wanted to use my favorite Art et Manufacture tart dish from Provisions. Funnily, I’d never made frangipane. My assistant Amanda (who also took the shots with my hands in them for me) had to google it for me so I could figure out some alternative to calling it “frangi-panty”. So, that was a sophisticated moment. I’m obsessed now. Frangipane everything from hence forth. Especially for the fruits of fall. Don’t miss Izy’s book. You can purchase it here!

for crust
for frangipane
for tart

52 thoughts on “Pear, Frangipane & Caramel Tart from “Top with Cinnamon””