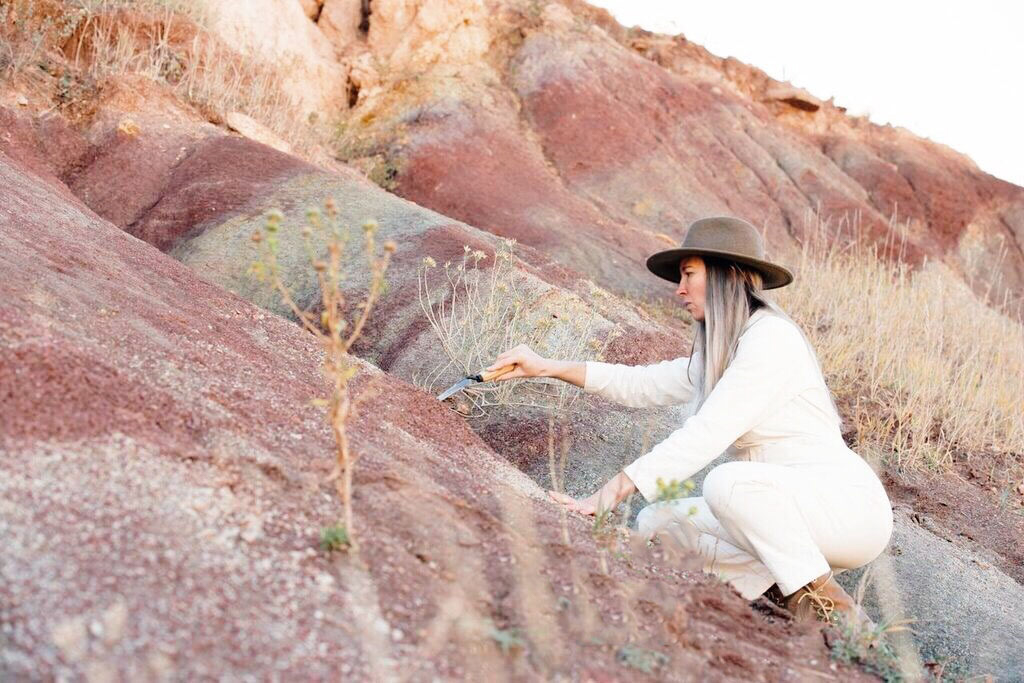 Hello, my name is Stella Maria Baer, and I am a painter and photographer. I grew up in Santa Fe, New Mexico. I live in Colorado with my husband Seth, our boys Wyeth and Whitman, and our sheepdog. In my work, I explore the mythology of the desert and the cosmology of space. In my paintings, I work in watercolor and oil. In my photographs, I look at the relationship between how we see women’s bodies and how we treat our land. Six years ago, I started asking more questions about where the paint I use comes from, how it’s made, and what it is made from. These questions led me to start making paint from dirt and sand – to create work not just inspired by a landscape but made from the land itself. 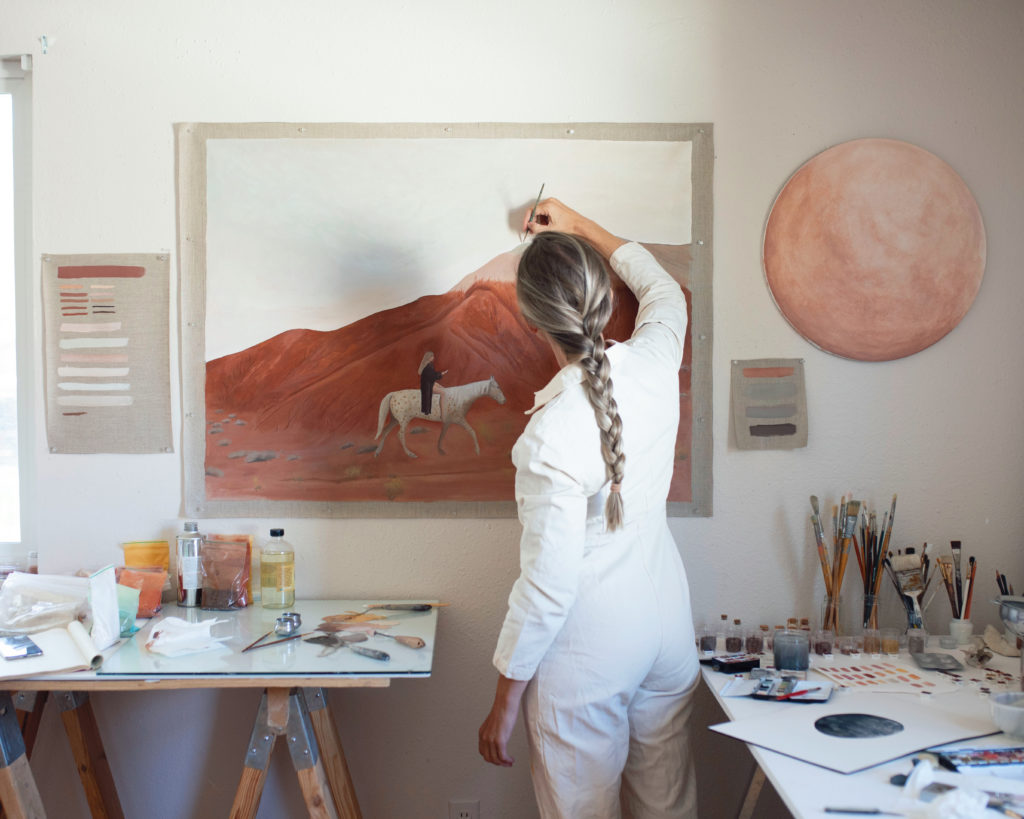 In September 2014, I was painting at sunset near hills in northern New Mexico when a gust of wind blew through the canyon and knocked over my easel, face first, into the dirt. I thought the painting was ruined, the surface full of rocks. When I told a friend what happened, she asked me if maybe the land wanted to be part of the painting. That question led me to start researching artists who made their own paint.

I began experimenting with different methods of paint making. At the time, I was looking at a lot of Rothko and learned that he made his own paint. I was working on a series of paintings of moons and planets and interested in the idea of being at home in a place that felt like another world. I wanted my paintings not only to remind me of the land that felt like home but to carry that land in the paint on the canvas.

Discovering the Alchemy of Paint Made From Dirt & Sand

During this time of experimentation, I became pregnant. By then I was mixing earth pigments into my watercolors but still working with traditional paint. I had a vision for a new series of oil paintings but the more I researched possible health concerns, the more worried I became about using oil paints and mediums while pregnant. I decided to stop working in oils for the rest of my pregnancy and concentrate on watercolors.

Just after my son Wyeth’s first birthday I did an artist residency in Joshua Tree, focusing on making paint from dirt and sands. During that time in the Mojave desert, I fell in love with the process of paint making. There was something meditative about walking out into the land, gathering the dirt and sands, grinding them with a mortar and pestle, suspending the pigments in water, and turning them into paint. I began to see making paint from the earth as a form of alchemy, a physical process that speaks to an inner reality.

Tracing the Origins of Color in My Studio

Little by little over the next few years I transitioned my studio from traditional paint to earth pigments. It was a slow process, and at first it felt daunting, mixing by hand the colors I used to squeeze from a tube, but I wanted to know where the color came from and what held it together. I wanted to trace the source. The process was tedious but grounding. At first, it was watercolors I made by hand, but while I was pregnant with our second child, I started making oil paints from earth pigments. My studio is in our home, and these days my two boys often wander in. It’s a relief to know they won’t put their little hands in paint that could harm them.

The Toxic Reality of Many Traditional Paints

Through this process, I’ve learned a lot about the fragility of our planet and the unspoken harm so many art practices cause. Traditional painting materials are not made with our bodies or our earth in mind. Many oil mediums give off harmful fumes. Many traditional paints are toxic. Acrylic paint is a petroleum-based polymer, a plastic. Working in acrylics washes a staggering amount of microplastics into our waterways.

Choosing What’s Better for Us & the Earth

But painting doesn’t have to be harmful to our bodies or our planet. There is another way. Making paint from earth pigments takes longer, but I wanted to choose what is better for ourselves and earth over what is convenient, fast, and cheap.

There are also many places, like my friends at Case for Making in California, that sell paint made from earth pigments. I use a combination of paint I can source and trust, and paint I make myself from the lands that haunt my work. Friends and strangers often send me dirt and pigment from all over the world that I work into paintings. I love how working in pigments grounds my materials in particular times and places.

When we make earth pigments, we must do so in a way that is mindful of the fragility of land. In the past few years, I’ve seen sacred landscapes destroyed by Instagram tourism, often by travelers trying to take photos who don’t realize how delicate the land is under their feet. In my workshops, I teach a “leave no trace” approach to gathering dirt and sands.

Many people don’t realize collecting dirt and sand even in small amounts is illegal in national and state parks, often because the land would be damaged in the process. It’s important to always seek out the necessary permits when gathering and to gather in a way that doesn’t harm the land around us that is already under constant threat. Making paint from dirt and sand in a way that honors the earth must include gathering responsibly.

Finding Ourselves & the World We Long For

The process of tracing origins is never easy and often uncomfortable, whether it is with food, clothing, paint, or ourselves. But I think it’s important to ask where things come from and let those questions lead you where they will. There is an alchemy to holding dirt in your hand and turning it into a painting. There is much to learn from the slow process of transformation, moving little by little into practices that reflect more and more who we long to be and create the world we long for.

To learn more about Stella’s work and Earth Pigment workshops, visit her website.

9 thoughts on “The Alchemy of Making Paint From Dirt & Sand”